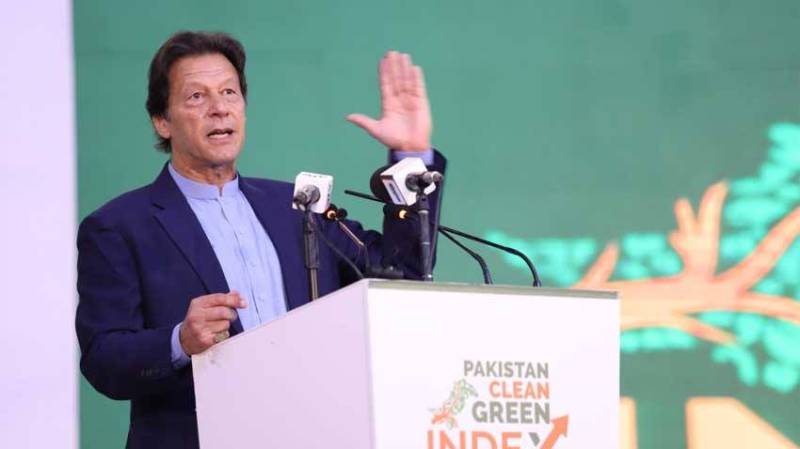 ISLAMABAD – Prime Minister Imran Khan on Monday urged upon the nation to join hands in making Pakistan clean and green, turning it into an environment friendly place for present and coming generations.

"We have to make a decision today what kind of Pakistan we want - either clean or polluted," the prime minister said in his address at the launch of Clean Green Pakistan Index Cities Ranking at Islamabad’s Convention Centre. It aims at improving overall green and clean outlook of the Pakistani cities by kicking off competition amongst them on various indicators.

The event marked oath-taking of the office-beaers of CGPI Implementation Committees from 19 cities across the country, witnessed by the prime minister and a jam-packed hall of youth as Green Champions.

"We need to realize the worth of this land, make united efforts to preserve its natural environment and turn it into a hub of tourism," he said.

The prime minister regretted that ruthless tree-cutting in Lahore during last decade in the name of development played havoc with the great city, which was now engulfed by life-threatening smog.

"The concrete jungle in Lahore has replaced 70 percent tree cover and the result is obvious in shape of silent-killer pollution," he said, adding that the reason was nobody thought about the environmental impact while carrying out developmental projects.

He recalled that Lahore, which 30 years ago boasted fresh air and clean drinking tap water, had now become life-threatening for children and elderly due to alarming rise in lung diseases due to unhealthy environment.

Imran Khan stressed that cleanliness was an important aspect in the Islamic teachings and said 'We need to live our lives keeping in mind consequences of our steps for this world".

He said disposal of solid waste and industrial garbage into rivers and streams had contaminated the water flow which even seeped into the underground water reservoirs.

He said the government could not overcome the environmental challenge alone and needed the collective efforts of elected representatives and general public.

Terming youth and students future of the country, he asked them to come forward and make Pakistan clean and green.

The prime minister said the government was about to launch the country's best-ever local body system in the country to genuinely ensure empowerment of people at grassroots level, where public even in villages would be encouraged to participate in the contest of Green Champions.

He said though it would be implemented in Punjab and Khyber Pukhtunkhwa, however proposed the Sindh government that adoption of similar model would be helpful in addressing its civic issues.

Imran Khan said, "We have to understand the concept of Naya Pakistan, which means the change of mind first in right direction." He said Allah Almighty does not change the condition of a nation, unless it makes efforts to bring a change within.

The prime minister said greed had destroyed the planet Earth and stressed that taking care of environment was equal to serving the Allah's creatures.

He expressed confidence that the country would soon achieve the goals of green Pakistan and said plantation at a vast level would be carried out at open spaces across the country.