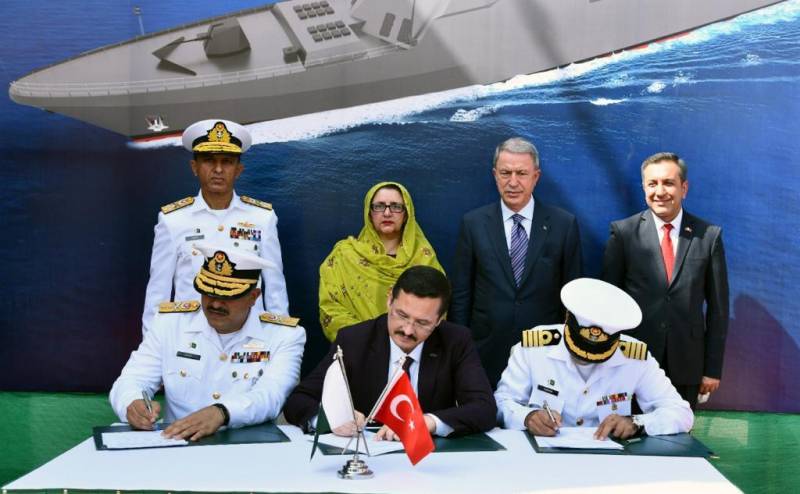 Minister of National Defence of the Republic of Turkey, Hulusi Akar, graced the occasion as Chief Guest. The ceremony was attended by Minister for Defence Production Zubaida Jalal and Chief of the Naval Staff, Admiral Muhammad Amjad Khan Niazi.

While addressing the ceremony, the chief guest termed Keel laying of PN MILGEM Corvette as a historic event for Ministry of Defence Production, Pakistan Navy, KS&EW and M/s ASFAT of Turkey. He appreciated the commitment and dedication of M/s ASFAT (Turkish state owned Defence Firm) and KS&EW for construction of technologically advanced Corvette.

The chief guest also marked that Turkey stands in solidarity for Pakistan's principle stance over Kashmir issue and Azerbaijan conflict.

Speaking on the occasion, Zubaida Jalal also appreciated the performance of Karachi Shipyard and underlined that indigenization is forefront of Pakistan’s policy.  She underscored that it is convincing to see state of the art warship is being built in Pakistan.

The MILGEM Class Corvettes will be one of the most technologically advanced stealth surface platforms of Pakistan Navy Fleet. The vessel is equipped with state of the art weapons & modern sensors including surface to surface, surface to air missiles, anti submarine weapons and Command & Control system.  Induction of these ship in Pakistan Navy would significantly add to the lethality of Pakistan Navy’s capabilities and contribute in maintaining peace, security and balance of power in Indian Ocean Region.

Earlier, the MD KS&EW Rear Admiral Ather Saleem welcomed the distinguished guests and highlighted that Karachi Shipyard is fully cognizant and aligned with the goals set forth by the Government and Pakistan Navy to pursue self-reliance in Defence Shipbuilding Industry. He emphasized that deep rooted friendship with brotherly country Turkey for this mega project will open new vistas of further cooperation in the field of indigenous warship construction and other defence sectors in Pakistan.

Construction of corvettes in Pakistan is aimed to provide impetus to local ship building industry and to further enhance KS&EW capabilities. These Ships are being constructed as per modern Naval Ship class standards with stealth features. The 2nd MILGEM Class Corvette will be delivered in early half of 2024.

The ceremony was attended by representatives of M/s ASFAT Turkey, Istanbul Naval Shipyard and officials from Government of Pakistan, Pakistan Navy and KS&EW.