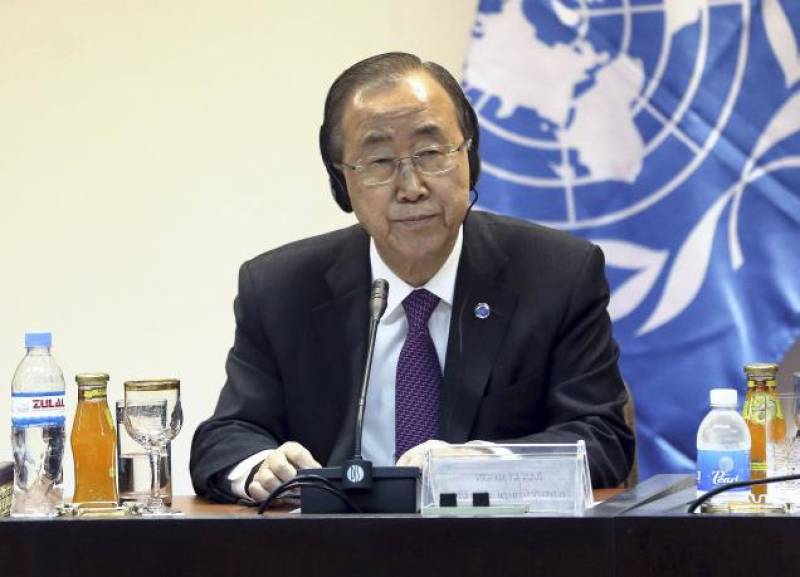 UNITED NATIONS (Web Desk) - The United Nations on Sunday assured quake-hit Nepal that the world body will mount a major relief effort and support it in dealing with the humanitarian crisis.

Secretary-General Ban Ki-moon sent his deepest condolences to the Nepali government and to all those affected by the 7.9-magnitude earthquake that jolted the country yesterday, killing nearly 2,000 people and injuring 5,000 others and said the UN will help the government in coordinating international search and rescue operations.

“The reports of the devastation are still coming in and the numbers of people killed, injured and affected by this earthquake continue to rise,” Secretary-General Ban said in a statement.

“It is clear that very many lives have been lost. There has also been significant damage to Nepal’s irreplaceable cultural heritage. The United Nations is supporting the Government of Nepal in coordinating international search and rescue operations and is preparing to mount a major relief effort,” the UN Chief added.

The powerful quake razed to the ground a number of buildings, including the iconic Dharhara tower and the landmark Darbar Square - a UNESCO World Heritage site - in the heart of the capital, trapping scores of people.

The UN expressed concern over the massive number of people in hospitals in the Kathmandu Valley that are running out of room for storing dead bodies and also running short of emergency supplies.

UN field offices reported that the eastern region was not badly affected and that the Terai had been minimally affected.

The Nepali government has requested international assistance in the response to the disaster, with particular importance placed on the search and rescue capacity, medical teams, supplies and tenting for hospitals, heavy equipment for rubble removal and helicopters for transport and access to blocked areas.

President of the General Assembly, Sam Kutesa, also expressed his deep concern and sorrow over the devastation.

Executive Director of the UN Population Fund, Babatunde Osotimehin, also expressed his deepest sympathy to those affected by the earthquake, saying he was “shocked and saddened” by the deaths and disappearance of hundreds of people, as well as the widespread destruction and displacement caused by the disaster.

He added that the UNFPA stood ready to join international efforts to give assistance to the government and people of Nepal, expressing particular concern about the fate of pregnant women who have been affected by this tragedy, including those who might face potentially life-threatening complications.

All efforts will be exerted to support their safety and the safety of their babies, he said.