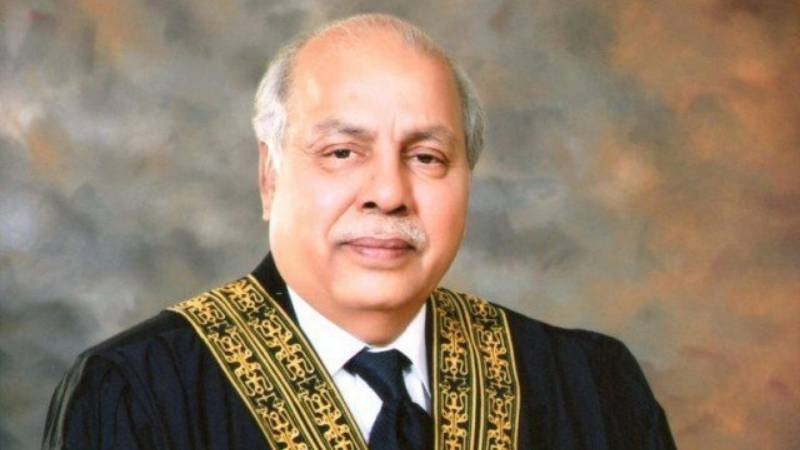 The Supreme Court ruled on Thursday that only the chief justice of Pakistan (CJP) could take suo motu notice on his "discretion and shall do so if requested or recommended by a bench" of the apex court.

The order passed by a five-member bench stated that "the chief justice of Pakistan is the sole authority by and through whom the said jurisdiction (suo motu) can be, and is to be, invoked/assumed".

The order further said, "No bench may take any step or make any order (whether in any pending proceedings or otherwise) as would or could constitute exercise of the suo motu jurisdiction (such as, but not limited to, the issuance of any notice, making any enquiry or summoning any person or authority or any report unless and until the chief justice has invoked/assumed the said jurisdiction."

The five-member bench headed by Supreme Court’s acting Chief Justice Umar Ata Bandial ruled that the August 20 order by another SC bench on a petition related to the harassment of journalists stood "recalled" and all filings stood "disposed of". Justice Ijazul Ahsan, Justice Munib Akhtar, Justice Qazi Mohammad Amin Ahmad and Justice Mohammad Ali Mazhar were members of the bench.

"Substantive claims" made in the application by the Press Association of the Supreme Court (PAS) and other petitioners would be placed in front of the chief justice for consideration, it said.

A two-member SC bench consisting of Justice Qazi Faez Isa and Justice Jamal Khan Mandokhel observed on Friday that since the application had raised matters of public importance with reference to enforcement of fundamental rights, it met the criteria to invoke Article 184(3) of the Constitution under which suo motu is justified.

In its August 20 order, the Supreme Court had asked three senior officials to appear before it to hear the government's version on the rising incidents of harassment of journalists.

It issued notices to the secretaries of information and broadcasting, religious affairs and human rights ministries as well as to the Council of Pakistan Newspaper Editors (CPNE), the All Pakistan Newspapers Society (APNS), the Pakistan Broadcasters Association (PBA), the Pakistan Federal Union of Journalists (PFUJ) and the Pakistan Electronic Media Regulatory Authority (Pemra), asking them to state whether the allegations made in the application were correct or not.