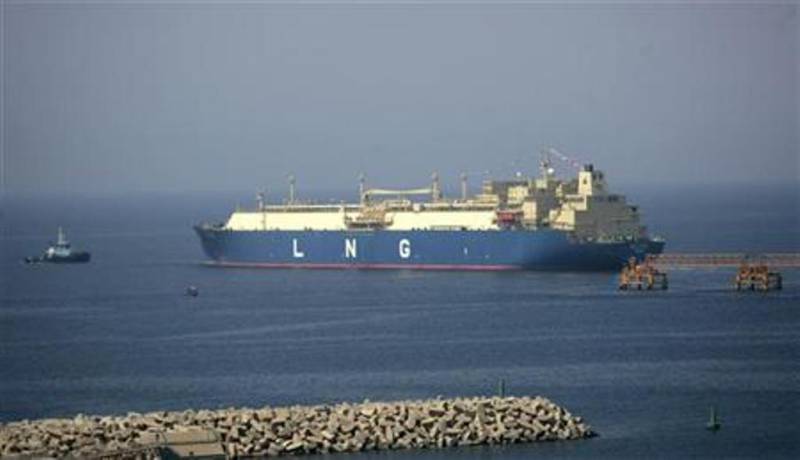 The FSRU, after going through clearance, will dock at Engro Corporation's Elengy Terminal Pakistan Limited (ETPL) where the cargo will undergo 'regasification' before being injected into the Sui Southern Gas Company Ltd (SSGCL) network.

The SSGCL is then required to transfer it to the Sui Northern Gas Pipelines Ltd (SNGPL) at the Zamzama-Sawan gas establishment.

The LNG will initially be provided to four Independent Power Producers (IPPs) in Punjab, including Kot Addu Power Company (Kapco).

In the second phase of the operation, fuel will be used for Compressed Natural Gas (CNG) and in the third, it will be supplied to the fertiliser sector.

Subsequent shipments of LNG will be transported in Qatargas' Q-Flex carrier.

Confusion persists over the liquefied natural gas (LNG) deal with Qatar as the government has not yet disclosed the per MMBTU price of gas.

Under the $22 billion reported deal, Qatar agreed to supply 500 million cubic feet of LNG per day for 15 years. However, there was no official word on LNG deal and details about the rate of the purchase and sale price.

Concerns over the specifications of the terminal were raised by Qatargas with the Port Qasim Authorities (PQA) at a meeting on March 9. Qatargas officials said a series of steps were required to be completed by PQA “as soon as possible in order for the terminal to be accessible”.

The terminal required additional dredging in order to facilitate the Q-Flex carrier. The ongoing modifications are not going to hamper the transfer of the first shipment of LNG to the Elengy terminal.

Modifications at the terminal are underway and are expected to be complete within the next few days.

Federal Minister for Petroleum and Natural Resources Shahid Khaqan Abbasi, responding to call-attention notice, told the National Assembly on Wednesday that Liquefied Natural Gas (LNG) was reaching Pakistan as per schedule and its supply to the country’s natural gas system would be started from March 31.

However, the minister could not satisfy the opposition about the LNG price agreed with Qatar, saying the terms and conditions for the sale and purchase of LNG, including its price, are being negotiated with Qatar Gas and all aspects of the deal are being considered. “First shipment of 60,000 tonnes will reach Pakistan tomorrow (Thursday) and it will contribute two billion cubic feet of gas in the system and save $300 million to the power sector,” he told the National Assembly.

He said the price is being negotiated between the Qatar Gas and Pakistan State Oil (PSO) but declined to share details about it.