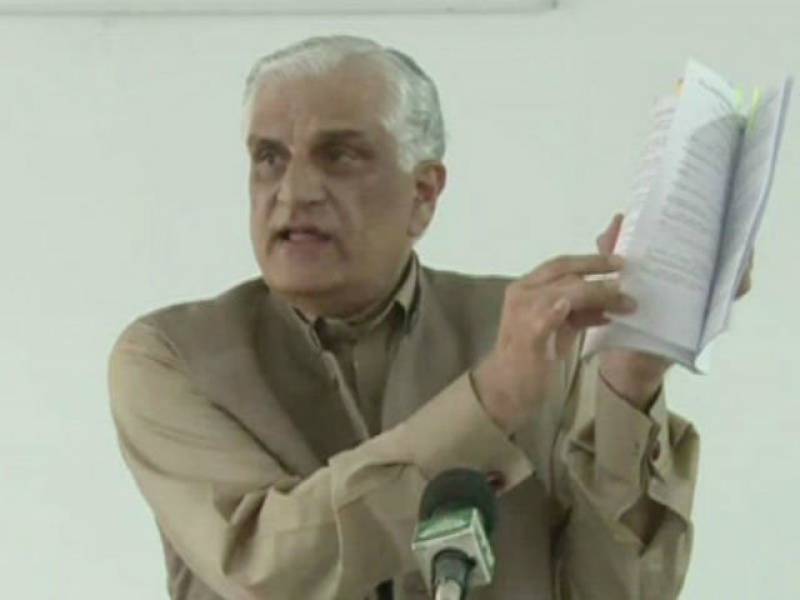 ISLAMABAD - Pakistan's law minister is expected to tender his resignation - one of the demands of Tehreek-e-Labbaik protesters -  in the wake of deadly clashes between the country's security forces and the Islamabad demonstrators that has so far left at least six people dead and over 200 injured.

A private TV channel claimed on Sunday that Zahid Hamid is expected to step down as law minister today.

On Sunday, Zahid Hamid released a video message on social media to assure the people that he believes in the finality of Prophet Muhammad (PBUH), a day after his family house was attacked in Punjab.

In the video, the law minister read out the oath that election candidates must take under the Constitution.

What kind of country is Pakistan where the Federal Law Minister Zahid Hamid in dreadful stress issues a message that he is a devout Muslim?

He would be lynched to death if home today.

What kind of message we are delivering to the world that even ministers are not safe? pic.twitter.com/n3ALY0260l

After reading the oath, the minister said: "This is the oath that is part of the law. And you all know that Constitution of Pakistan declares Qadianis, Ahmadi Group and Lahori Group as non-Muslims.

I further want to say I love Hazrat Muhammad (PBUH) from the depth of my heart.

I am an Ashiq-e-Rasool and my family and I are prepared to lay down our lives for the honor and sanctity of Prophet Muhammad (PBUH)."

Don't make me another Salmaan Taseer

Media reports also suggest Hamid has made it clear to PML-N head Nawaz Sharif that if he is pressurised to tender resignation, he will reveal the name of the person who gave the order for the Khatm-e-Nabuwwat amendment.

He also threatened to reveal the means used to win the NA-120 by-election.

The government has reportedly offered to appoint Zahid Hamid as an ambassador to any hand-picked country and to make his son an MNA or MPA, but such offers have been rejected by the law minister, Pakistan Today claimed.

The reports further disclosed that the government agreed to ask the law minister for his resignation but the minister, rejecting all offers of government in return for his resignation pleaded, “For God’s sake do not make me another Salman Taseer and bring forth all the officials responsible for Khatm-e-Nabuwwat fiasco.”

On Saturday evening, angry protesters stormed the minister's residence in his hometown in Pasrur - a tehsil of Punjab's Sialkot district - and vandalised the property.

According to Express News, several men belonging to the Tehreek-e-Labbaik broke into and ransacked the minister’s haveli.

They smashed windows and damaged furniture. The minister and his family members were reportedly in Islamabad at the time of the attack.

The attack was reported hours after security forces launched a crackdown on religious protesters camping at Faizabad Intersection in Islamabad since November 8.

The protesters, who before Saturday numbered some 2,000 people, are demanding that federal law minister Zahid Hamid resign over a hastily-abandoned amendment to the oath that election candidates must swear.

Protests broke out all across the country after the government started taking action against the participants of the Faizabad sit-in in Islamabad.

PML-N MNA Mian Javed Latif was injured in an attack in Sheikhupura by men protesting against the crackdown.

The lawmaker from NA-133 (Sheikhupura) was in the Batti Chowk area to negotiate with the protesters, Express News reported.

One of the MNA’s security guards was also injured in the attack.