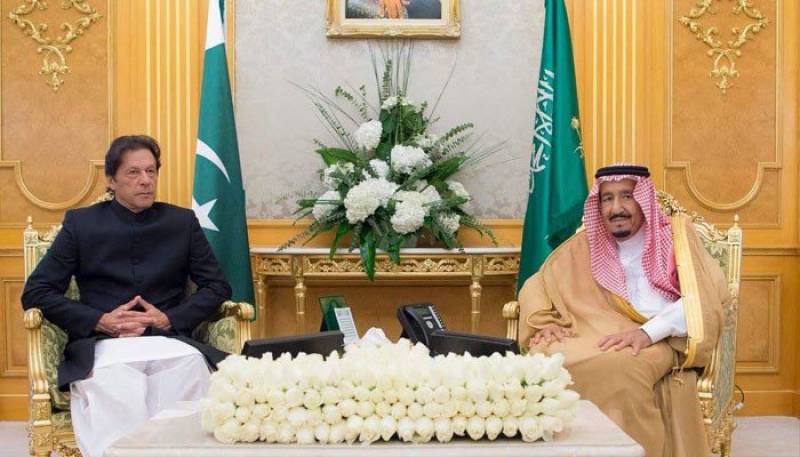 Prime Minister Imran Khan’s visit to Saudi Arabia seems more monumental by consequences than any of his predecessors. Islamabad did not adopt policies radically different from its traditional stance. The Pakistan Tehrik-e-Insaf’s election rhetoric stands corrected as its leader reiterates commitment to cement bilateral relations while inviting Saudi Arabia as the third partner in China-Pakistan Economic Corridor. Yet much work remains to be done to nurture people-to-people connection. The two brotherly nations have to reclaim the ground lost to stereotypes and misperceptions over the past three decades.

True that Pakistan’s share in Hajj pilgrims is the second highest after Indonesia, not to mention an endless stream to perform Umra all year round. Saudi Arabia is already home to over 3 million Pakistanis. Also, undoubtedly robust state-to-state ties thrive on economic and strategic arena while the private businesses have meshed up together like a complex jigsaw puzzle. Yet, various cultural and societal stereotypes are in plenty.

Thanks to western media outlets and wire services partisan coverage of events after 9/11 and dearth of direct reporting by their Middle Eastern counterparts, Pakistanis are perceived as backward and primitive like the Taliban. Another more nuanced perspective blurs the vivid cultural, societal and religious-ideological differences with India and sees the two people as similar. The Arabs, especially the ones in the Gulf region, are no less a victim of Such ignorant generalizations.

The hate is rooted in the controversy of Pakistan’s support to Afghanistan’s resistance fighter called Mujahideen and the support extended by Saudi Arabia. Until a couple of years ago, some controversial fatwas by fringe religious clerics and half-baked wildlife hunting stories hit the headlines in mainstream Pakistani media. Such secondary source reporting of isolated incidents and events fueled anti-Arab propaganda on the one hand and reinforced the stereotypes peddled with hate to benefit from largescale ignorance. For over a decade, social media has factored in heavily in promoting fake news, often for the sake of clicks if not for vested interests.

Saudi Information Minister Dr. Awwad S. Alawwad and his Pakistani counterpart Fawad Ahmed Chaudhary addressed the challenge in their first official bilateral meetings. Islamabad and Riyadh have committed themselves to address the divide on the media front, may it be on the news and information front or the entertainment sector. The ministries can only create an enabling environment by easing the regulations. Unless the private sector sees a commercial viability of the committed initiative, the buck won’t pass much farther.

The monumental success of Turkish drama exports has lessons for both, Pakistan and Saudi Arabia. Islamabad has long lived inside the cocoon of Urdu limiting the impact and profit its quality drama serials could have generated. The cable channels owned by billionaire Saudi national have been used by Indian production houses as well as Bollywood smartly for over two decades, not only helping to create the country’s soft image with the Arab world but also bringing home valuable foreign exchange earned through advertisement revenue. Not just the Arab cable networks, Indian drama – for what its qualitative worth – had once made it to the Pakistani airwaves too.

The reaction has been strong and consistent. The drama industry has surged. All it needs is diversification from the standard Urdu format. There are bold production houses with ingenious directors who can team up to enact stories spread across Saudi Arabia, UAE and Turkey, and dub in the respective languages for a large foreign viewership not merely to correct the country’s image but also bring him the vital foreign exchange.

Amidst the ongoing reforms in Saudi Arabia, the country has prioritized its image building too. The GCC media houses will have to assume the lead role. For a  better portrayal of Saudi society and culture, its cable TV networks need to expand their linguistic footprint beyond Arabic. Pakistan, home 209 million people and located in close proximity to the Arabian Peninsula, is the right choice for collaboration. Drawing another lesson from Turkey’s global media coup, its thriving tourist traffic has a lot to with the country’s dramas telecast from Scandinavia to Latin America and Russia to New Zealand.

Of late, Saudi Arabia has put its archaeological treasures and geographical diversity alongside the religious services provided to millions of pilgrims in Makkah and Madina Munnwara each year. Thanks to social media, Pakistan’s north-western and northern areas too have seen an exceptional promotion for its mesmerizing natural beauty and cultural diversity.

While Pakistanis long for opportunities to learn Arabic for religious and occupational reasons, Urdu has, interestingly, emerged as second widely spoken and understood the language in the Gulf region. It’s no secret that many Urdu and Pashto words have become part of colloquial Arabic spoken in the GCC region.

Pakistan and Saudi Arabia requisite a ministerial-level forum to follow-up on cooperation in information and entertainment sectors. The regulations need to be eased for the media productions to make it to the airwaves. Coincidently, when the Pakistan film industry is seeing a revival after a prolonged lull, the cinema houses in Saudi Arabia are also attracting larger and diverse viewers.

Besides institutionalizing a state-level mechanism to promote ties in information and entertainment realm, the respective private sectors also requisite developing synergy to work and profit together. The avenues such as Pakistan-Saudi media fair and fora for directors, writers and actors need to be instituted too. To conclude, it’s high time for Riyadh and Islamabad to reap the low-hanging fruit by easing regulations and realizing the urgency to cement people-to-people connection.