Towards ‘CPEC Plus’ or a Balancer? Saudi Entry Raises Hopes, Stakes, and some Critical Questions 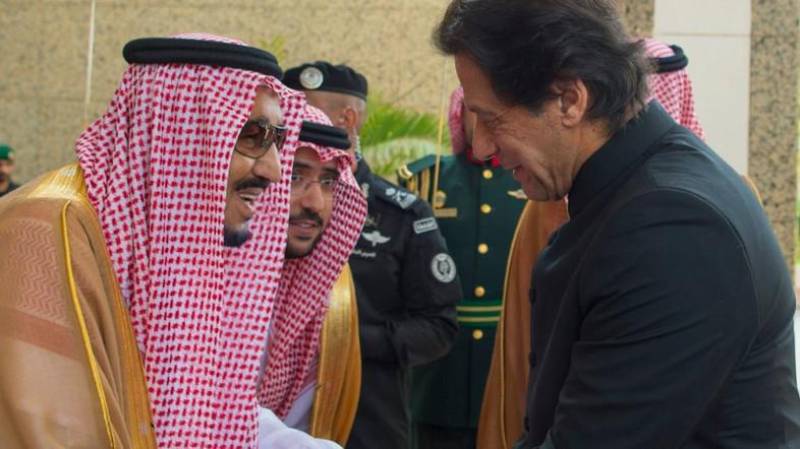 The cat is out of the bag, finally. During PM Imran Khan’s maiden visit to Saudi Arabia, the host nation was formally invited by the visiting delegation to join China-Pakistan Economic Corridor (CPEC) as third ‘strategic partner.’

Earlier, during the visit of Chinese foreign minister Wang Yi to Islamabad in the beginning of September, the two countries reportedly decided to ‘broaden the base’ of now half-a-decade old CPEC, said to be having a total portfolio of around $ 62 billion, and expected to increase further.

Media – at home and to some extent abroad – is abuzz with reports of expected Saudi investment in the range of $ 8 to 10 billion, mostly for the ‘Gwadar Oil City.’ [On the higher side, the advisor to PM on Commerce is reported to have tweeted the figure of $ 22 billion.]

It is, however, yet to be known whether Saudis have also accepted the offer formally, or not. Information minister says that a high level delegation from Saudia is coming to Pakistan soon and the details will be finalized then.

On his way back home from the Kingdom, Imran Khan and his team flying with him also had a stopover in the United Arab Emirates (UAE) – meeting the Crown Prince. Abu Dhabi interactions generated more of the exciting news: UAE also intends to invest – and invest big – in Pakistan.

Another minister was also reported as saying that Afghanistan would also soon announce, formally, joining CPEC. The position and posture that Afghan leadership has been taking about CPEC in past couple of years are well known; let us keep this piece limited to prospective Saudi coming to the fold.

Going by economic theory, it indeed is big news for Pakistan, especially for its new team of economic managers, and comes about at a time when Islamabad is looking for ways to diversify the flows of hard cash coming into Pakistani economy.  Islamabad and Riyadh are already bound in close multidimensional bonds and a closer, stronger economic and commercial partnership should be expected to cement the bonds further.

Theoretically, there are some real prospects. Saudi Arabia is the world’s largest oil producer and exporter. It is the largest economy by the size of GDP in the Muslim World. It still sits on foreign exchange reserves of over $ 500 billion – around 150 % of Pakistan’s total GDP. Saudi Arabia trades with the world during a financial year more than Pakistani economy produces as a whole in the same period. The state-owned wealth fund of the Kingdom is also around $ 700 billion, one of the world’s top such treasures.

China, the major financier of CPEC – a flagship project of its ambitious, global Belt and Road Initiative (BRI) – is also the single largest trading partner for Saudi Arabia. During King Salman’s visit to China last year, the two countries inked agreements worth $ 65 billion. Beijing and Riyadh are cooperating on a host of initiatives linked to BRI in the Gulf region and broader Middle East.

Both Islamabad and Beijing have been signalling for some time that CPEC – while initiated bilaterally – is not an exclusively bilateral arrangement and they are open to including other countries in it. However, it has not been made clear as to what the ‘joining’ of another country would really mean. Some clue can be obtained from China’s BRICS Plus imitative of last year, under which 5 more emerging market economies were to be involved in a range of cooperative projects, while not disturbing the original BRICS membership. But whether ‘expansion’ in CPEC would imitate the BRICS Plus move – making it ‘CPEC Plus’ – is still to be clarified.

This author believes and has highlighted it a number of times that CPEC essentially is a ‘Greater Eurasian Corridor’; we can also call it ‘East Asia-Middle East Corridor’ and ‘East Asia-Gulf Corridor.’ Three out of five Central Asian nations are also linked to Pakistan through CPEC; so, it is ‘Central Asia-South Asia Corridor’ as well. Once completed (talking about its road infrastructure from Kashgar to Gwadar), the Corridor will surely be serving these purposes. But the nature, as well as terms and condition of entry / participation of more nations, have to be clearly laid down by Islamabad and Beijing.

Some countries of the region and extended neighbourhood – especially Saudi Arabia and Iran – have expressed their willingness publically to be part of CPEC, at least a couple of years ago. Vast trade and investment potential is there, indeed.

In this background, the announcement of the invitation to Saudi Arabia also raises some questions. The first is, why would Pakistan (and China, as information minister says that Beijing has been taken into confidence on the offer to Riyadh) start this expansion with a nation which shares neither land nor maritime boundary with either Pakistan or China? Is such a nation rightly-placed to be the third formal strategic partner in the Corridor?

The second aspect may be Saudi Petro-wealth. Even in that case, one has to keep in mind that the oil-rich Kingdom is passing through a critical transition – from oil dominant economy to increasing the share of non-oil sector in its GDP.

This transition needs huge sums of money. Saudi budget deficit was some 9 % of GDP, eating up a chunk of already depleting forex reserves, further. Depressed crude prices – though rebounding lately – have kept Saudi revenues under pressure since early 2015 and there is hardly any major breakthrough visible (in fact OPEC is under pressure from Trump administration to lower oil prices and even China has recently expressed its displeasure over a rise in oil prices, even signalling a discontinuation of purchase.) The much talked about IPO of Saudi Aramco is yet to see the light of the day. Saudi Vision 2030 itself needs massive investments. In this situation, does KSA really have enough money to spare and invest in Pakistan?

The economics and commercial viability of what we hear as ‘Gwadar Oil City’ has also not been shared as of now; it needs a thorough debate by concerned experts.

But there is a third aspect involved, too. One can note an underlying feeling that PTI government is making efforts to enter a ‘balancer’ as CPEC arrangement at present is one in which China is perceived as a ‘giver’ and Pakistan, as a ‘taker’, though Pakistan is contributing its due share from its own resources, as part of its yearly Public Sector Development Programme (PSDP). [Even PTI government has kept the PSDP allocations for 2018-19 intact while announcing the supplementary budget last week.] Will Saudi investment be financing Pakistan’s share henceforth or it would be a separate, third share? Would these be loans or else; something that has been PTI’s prime concern over the past five years?

The strategic aspect is also hard to ignore especially when PM Imran Khan and his cabinet members are heard talking about the ‘security threats to Saudi Arabia’ in unison. Let us not forget that Saudi Arabia’s defence spending is 8 times more than that of Pakistan. Riyadh would have a strategic confidence booster by having a foothold in Gwadar – just next to Iran’s Chabahar; but how would Tehran react to it also merits some thinking on part of Pakistani, and Chinese, policy-makers.

The last but not the least is whether PTI government would ensure the same level of transparency it has been demanding from PML-N in case of CPEC deals? This would apply not only to Saudi Arabia but any other nation and/or entity joining the Corridor, now, or in the days to come.