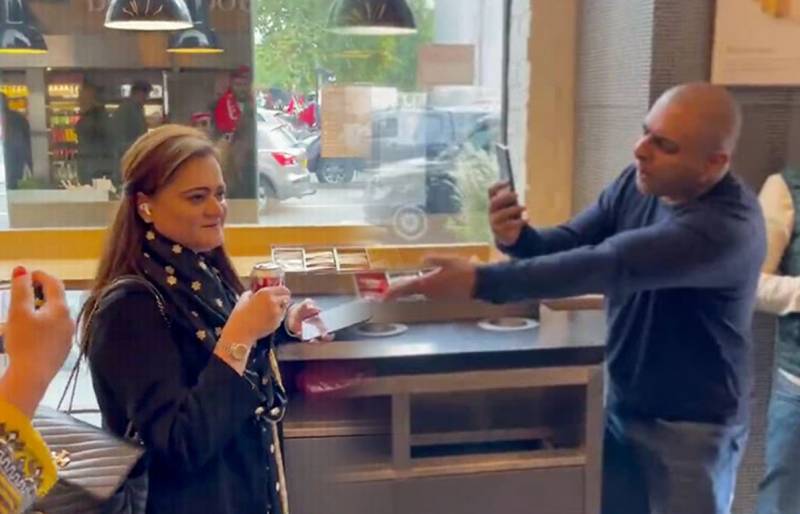 LONDON – Pakistan Information Minister and PML-N leader Marriyum Aurangzeb was heckled at London café by a group of people who were said to be supporters of Pakistan Tehreek-e-Insaf (PTI).

A viral clip on social media captured the booing incident as people railed at Marriyum Aurangzeb in a café near London's Marble Arch station and hurled insults, calling her ‘chor’ (thief).

A woman can be seen saying PML-N leader of making tall claims on TV there but here she does not carry a dupatta on her head while others filmed her.

Reacting to the disgraceful incident, Marriyum Aurangzeb said, “Sad to see the toxic impact Imran Khan’s politics of hate and divisiveness has had on our brothers and sisters. I stayed and answered each and every question they had. Sadly, they are victims of Khan’s propaganda. We will continue our work to counter IK’s toxic politics and bring people together.

Sad to see the toxic impact IK’s politics of hate & divisiveness has had on our brothers & sisters. I stayed & answered each & every question they had. Sadly, they are victims of IK’s propaganda. We will continue our work to counter IK’s toxic politics & bring people together https://t.co/KEgOPa5Y3p

As the video went viral, several colleagues of the minister came to her defence for exhibiting grace and composure in the face of the incident while Bakhtawar Bhutto and some activists praised Marriyum for holding composure while facing harassment.

Defence minister Khawaja Asif said “The times of some of our classes have not changed even after going to Britain, these people are representing the lowest level of our society. Giving this color to political differences is a sign of bad training and a trend that is the height of intolerance. The violent trend in politics after Madhhab will destroy our society.”

Finance Minister Miftah Ismail also commended her for her grace and composure in the face of such ‘harassment and baseless lies’.

I salute my sister @Marriyum_A for her grace and composure in the face of such harassment and baseless lies from that uncouth woman (who can be heard but thankfully cannot be seen). https://t.co/YHyn9Hvrnb

Planning Minister Ahsan Iqbal termed the incident as the “most deplorable, condemnable and shameful act by PTI hooligans”.

Most deplorable, condemnable and shameful act by PTI hooligans. These were Hitler’s tactics. Imran is a fascist and turning his followers into street gangs.
Well done @Marriyum_A you showed grace & faced them boldly.
Truly a Sherni! https://t.co/YSmHt0o6Vb

The incident comes months after a group of Pakistani pilgrims heckled and chanted slogans against Prime Minister Shehbaz Sharif and his entourage at Masjid-i-Nabwi in Madina.

In another incident, Minister for Planning and Development Ahsan Iqbal was heckled by family at a fast food restaurant, however, the members later apologised for their actions.