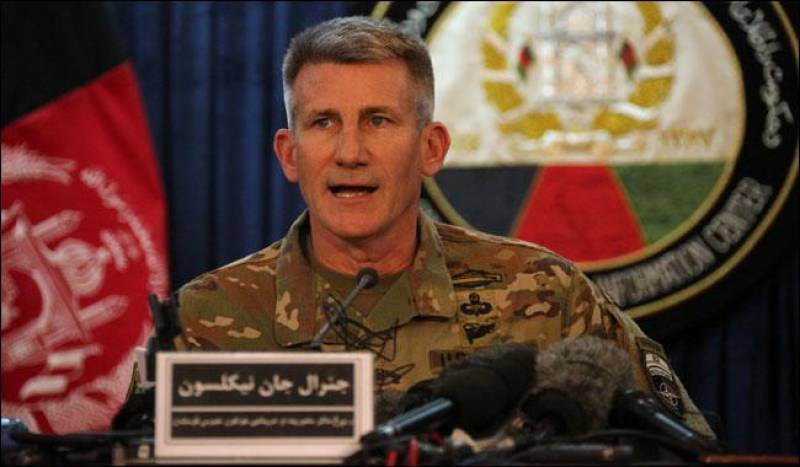 KABUL- Days after Donald Trump leveled allegations against Pakistan, commander of United States Forces and NATO in Afghanistan General John Nicholson has alleged that the US knows the Afghan Taliban leadership is in the Quetta and Peshawar areas.

“The Quetta Shura, Peshawar Shura, these shuras are identified by cities inside Pakistan, we know Afghan Taliban leaders are in these areas,” he said.

In an interview with Afghan media TOLOnews, US commander Gen Nicholson said the issue of sanctuaries outside the country was serious and has to be addressed.

“Support for terrorists and insurgents has to be reduced, has to be stopped,” Nicholson told TOLOnews.

On whether a diplomatic solution could be found, he said this was a possibility but that a significant military effort inside the country would be carried out and that together the US would work with the Afghan government to increase its military capabilities.

“I am primarily focused on activities inside Afghanistan,” but other officials are looking into the issue of sanctuaries in Pakistan, he said.

According to him, the issue of sanctuaries was a serious one and one that needed to be addressed.

Specifically asked whether the Taliban leadership in Quetta and Pashawar and other major Pakistan cities “shouldn’t sleep in peace from now on”, he said “I won’t put words in the (US) president’s mouth but he definitely conveyed this message.”

He said that following US President Donald Trump’s announcement earlier this week on his new war strategy, he, Nicholson, as a commander, has a new policy – “one based on conditions and not time.”

He said: “It gives us additional capabilities. We have a direction now provided by the US policy that is being supported by NATO.”

On the issue of general security in Afghanistan, Nicholson said the “civilian casualties is a real tragedy”.

“We know the Taliban receives the majority of its financing from narcotics traffic,” he said adding that the organization has become a group that brings misery and hardship to the people.

Asked if he sees the Taliban as a terrorist organization, Nicholson said: “They do terrorist activities and they enable terrorists.”

As an example he pointed to the Taliban links in the past to al-Qaeda.

On whether he had a mandate to go out and kill the Taliban, Nicholson said: “It is our mandate to put military pressure on the Taliban.

However, he said that the US wants a peaceful solution in Afghanistan but that the “Taliban need to know they cannot win militarily.” He said he hopes they enter the peace process.

“In the meantime we will put increasing pressure on them inside the country and on the external sanctuaries.”

In terms of developing the military, he said the special forces will be doubled and with the growth of the Afghan air force the Taliban will lose. He said these special forces’ commandos have never lost a battle against the Taliban and with an expanded force they will retake the majority of territory either outside government’s control or territory that is being contested.

He said as these forces expand their control, coupled with pressure on external sanctuaries, the Taliban will get to a point where it realizes it cannot win militarily and will have to enter into a reconciliation process.

Asked whether he was confident about winning the war, Nicholson said: “I am very focused on my mission here and on delivering for the Afghan people and delivering for my nation and the alliance. I am very encouraged by the new policy by the United States … yes I do feel confident.”

This interview comes just two days after Nicholson addressed a press conference in Kabul and said the Taliban has become a “criminal organization that is more interested in profits from drugs, kidnapping and murder for hire.”

He called on the group to lay down their arms and end the war.