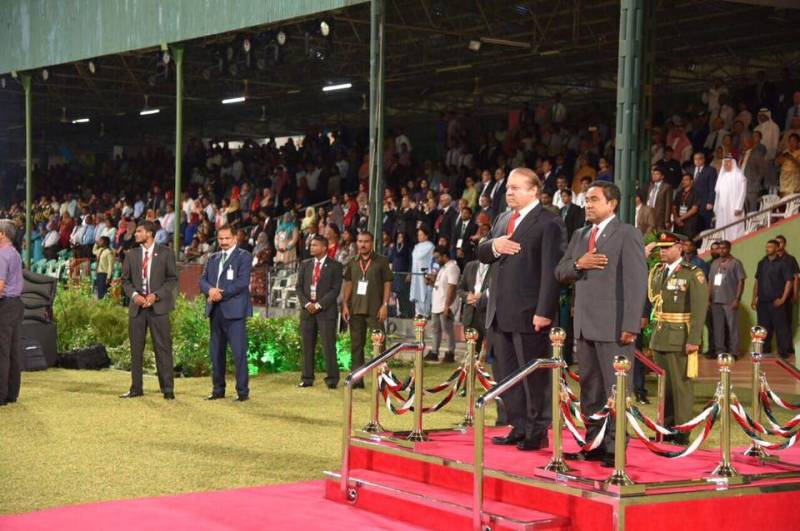 MALE - Prime Minister Nawaz Sharif attended the celebrations of the 52nd Independence Day of Maldives as a chief guest at the National Stadium Male on Wednesday.

The premier along with First Lady Kalsoom Nawaz arrived at the National Stadium Male to attend the grand ceremonies held to celebrate ‘Maldives Independence Day’. The special invitation was extended by president Abdulla Yameen.

Addressing a joint news conference along with Maldivian President Abdulla Yameen Abdul Gayoom in Male, Nawaz Sharif said that Pakistan was eager to strengthen its relations with Maldives in all fields of mutual interest as Pakistan lauded its vision to establish peace in the region.

"Maldives and Pakistan are on the same page to cope with the challenges," he declared.

In his address at the occasion, PM Nawaz said that India has harmed South Asian Association for Regional Cooperation and undermined the spirit of the regional forum.

He further said that Pakistan is ready to extend all possible cooperation to Maldives for the welfare and development of its people.

The prime minister who is on a three-day official visit to the country will also hold official talks with the Maldivian president during his stay in the state, which is also a member of the South Asian Association for Regional Cooperation (SAARC).

It is understood that the future of SAARC would also come up for discussion besides mutual cooperation of the two 'brotherly countries'.

A number of memorandum of understanding (MoU) and agreements are also expected to be signed during the visit for cooperation in various fields.

Earlier in a statement, the Foreign Office reminded that diplomatic relations with Maldives, established on July 26, 1966, had grown from strength to strength.

"Both countries closely coordinate with each other at regional and international forums on issues of mutual importance," it said.

Adviser to the Prime Minister on Foreign Affairs Sartaj Aziz is accompanying the prime minister. The visit would conclude on July 28.