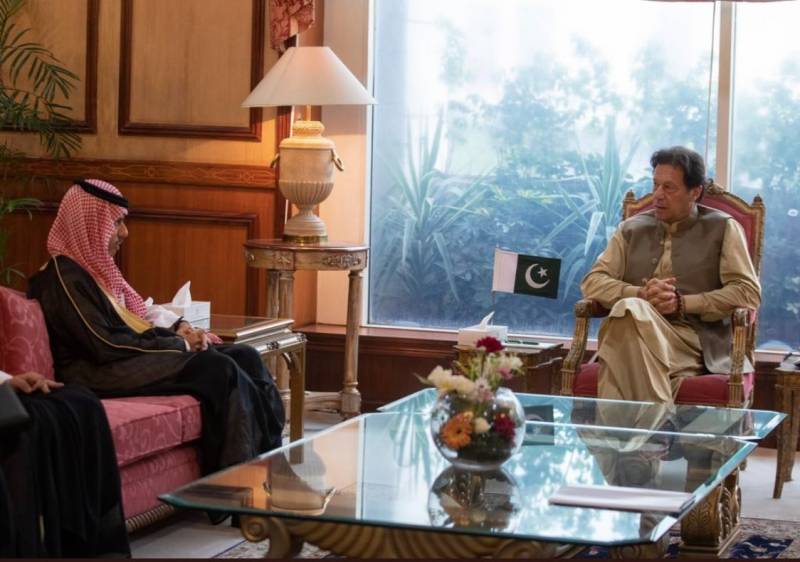 Prime Minister Imran Khan emphasized the need for strengthening the economic dimension of the relationship with Saudi Arabia and taking steps for realizing the vast possibilities in the trade, investment and energy fields.

He expressed it during a meeting with Saudi Foreign Prince Faisal bin Farhan Al Saud, who called on him on Tuesday.

The premier also extended warm welcome to the foreign minister and reaffirmed deep-rooted and historic bonds between Pakistan and Saudi Arabia.

PM Khan fondly recalled his visit to Saudi Arabia in May 2021. In line with the decisions taken on the occasion, the Prime Minister highlighted the assiduous follow-up and stressed the need for exploring new avenues of cooperation to further deepen bilateral relations in diverse fields.

He appreciated the work related to activation of the Saudi-Pakistan Supreme Coordination Council (SPSCC), which is the highest level platform designed to impart strategic direction to the development of Pakistan-Saudi Arabia relations.

He also lauded the important role of Pakistan’s community in Saudi Arabia in progress and development of the two countries. He underlined that the strong people-to-people linkages helped building solid foundations of bilateral cooperation.

Noting the difficulties being faced by Pakistani nationals due to Covid-related travel restrictions, the Prime Minister underlined the importance of timely measures for facilitation of their return to Saudi Arabia.

The Prime Minister thanked for the administration of Covid vaccines to Pakistanis living in the Kingdom. The Covid situation in the two countries and in South Asia was discussed.

On the situation in Afghanistan, the Prime Minister underscored the need for constructive engagement among the Afghan parties for securing a negotiated political settlement, which was critically important for peace and stability in the region.

Thanking the prime minister for the warm welcome accorded to the Saudi delegation, Prince Faisal underscored the importance that Saudi Arabia attaches to its strong relationship with Pakistan, based on bonds of brotherhood. He reaffirmed the resolve to take all possible measures to further strengthen the bilateral relationship under the strategic direction set by the Crown Prince and the Prime Minister.

Pakistan and Saudi Arabia enjoy close fraternal elations, marked by close cooperation and mutual support. Saudi Arabia is a member of OIC Contact Group on Jammu & Kashmir and steadfastly supports the Kashmir cause.