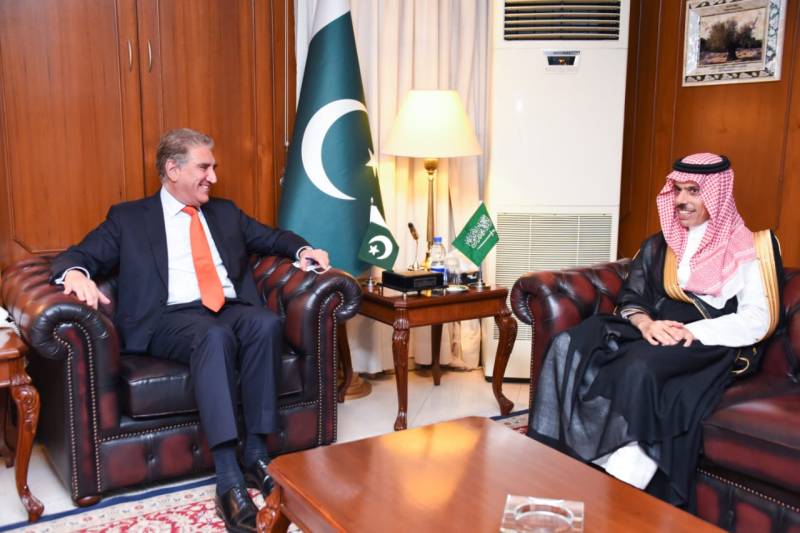 Speaking at a joint press conference in Islamabad, FM Qureshi said both countries have fraternal and historic ties.

"At the bilateral front, we are very comfortable with the way the things are moving and we can only improve on what we have," Qureshi mentioned.

He further added that “The vision 2023 is about transformation, and this is one area that had not been tapped into in the past, and we can contribute to. Qureshi also informed that he had a discussion on climate change, and how to combat the issue collectively with international cooperation, with his Saudi counterpart.

Good meeting with my friend @SMQureshiPTI this morning. We discussed ways to enhance our bilateral cooperation and to build on the strong bond between our two countries. pic.twitter.com/J3uCDTkoRC

He later thanked the Saudi government for its ‘unwavering support’ on FATF. "Their support has been phenomenal. Saudi Arabia had also been a part of the Organisation of Islamic Cooperation (OIC) Contact Group on Jammu and Kashmir and has been supportive and has shown clarity in supporting Pakistan on the disputed territory, he opined.

Regarding the situation in Afghanistan, the foreign minister said that he had a good discussion on the matter with the Saudi minister. “We discussed what to expect, what the challenges are, and what opportunities lay ahead of us. Our approach is the same and our objectives are shared,” he said.

Commenting on investment opportunities in Pakistan, he said there were immense opportunities for Saudi Arabia for investment in SEZs under the CPEC project. Our skilled, semi-skilled workforce and professionals could also make significant contributions to the Saudi Vision 2030.

Meanwhile, the Saudi dignitary said that the kingdom is looking to expand the dimensions of its relationship with Pakistan through the Saudi-Pakistan Supreme Coordination Council (SP-SCC).

“Pakistan and Saudi Arabia had a relationship that is founded in brotherhood and goes back many decades and both sides have supported each other in many areas and will continue to do so,” the Saudi FM said.

“We have made good progress on what the structure should be, what the organization should look like and what should be the work plan”, he mentioned adding that “there would be focal persons in both sides to oversee the progress made on this front.”

He also expressed hope that the Saudi-Pakistan Supreme Coordination Council (SP-SCC) will turn out to be an important milestone in taking the relationship between Saudi Arabia and Pakistan to new levels and institutionalizing it.

The Saudi dignitary also revealed that around 1.7 million Pakistanis in Saudi Arabia have received vaccines against the novel Covid-19. Saudi authorities valued the contribution of the Pakistani community to Saudi Arabia's economy, he opined.

Prince added that while two countries had worked in multiple areas in the past as well, he believed that the SP-SCC would be a ‘more effective tool’ to enhance bilateral cooperation between the two countries.

Saudi Foreign Minister H.H. Prince @FaisalbinFarhan on arrival at @ForeignOfficePk was warmly welcomed by FM @SMQureshiPTI. During their engagements, the two sides reviewed the entire gamut of bilateral ties, and regional and international issues.@KSAmofaEN @PakinSaudiArab pic.twitter.com/9Gnpo88lhv

Saudi Foreign Minister, accompanied by a senior delegation, reached Islamabad today. He was received by senior officials of the Foreign Office (FO) at Nur Khan airbase. The foreign minister was later welcomed by Qureshi, on whose invitation he is visiting Pakistan, at the FO, APP reported.

The Saudi foreign minister would also call on other dignitaries during the visit, the statement had added.