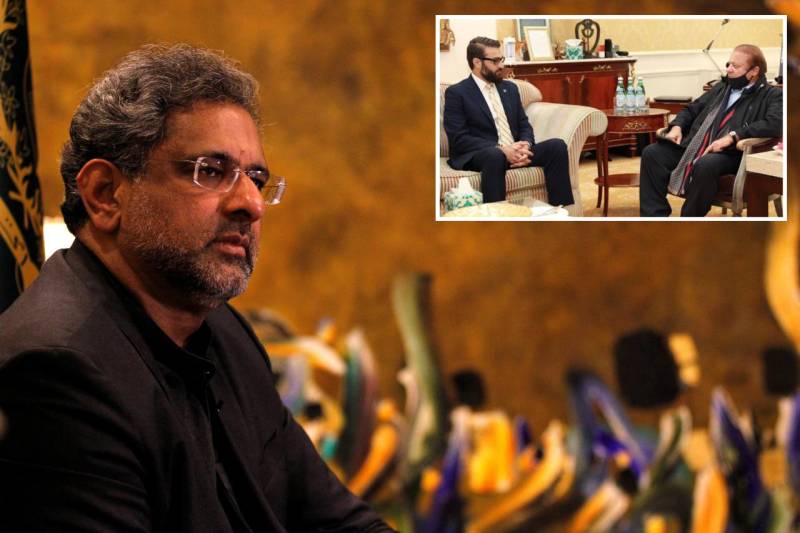 Former premier Abbasi while speaking in a current affair show on a private news channel revealed that Nawaz Sharif met Hamdullah Mohib at the request of Afghan President Ashraf Ghani.

The meeting between the two was in favor of Pakistan, said PML-N leader adding that Sharif not only called on Hamdullah but other Afghan officials as they were all part of a delegation.

The controversial statement of Afghan officials was rightfully condemned by Pakistani authorities. while mentioned that relations are always between states and not individuals.

PML-N supremo met the Afghan delegation in a bid to improve country ties with Afghanistan as both discussed bilateral relations at length.

Abbasi, while justifying the neighboring country as ‘friend’ of Pakistan, said “Even if someone is your enemy and they come at your doorstep, you listen to them”. Afghan President Ashraf Ghani had expressed a desire for a meeting between an Afghan delegation and Nawaz Sharif in the British capital around five months ago, he opined.

Earlier, the development draws huge ire on social media as many of the ruling party members and right-wing leaders condemned the meeting during an escalation in the region and called it unpatriotic to meet enemies of Pakistan.

Minister for Information and Broadcasting Fawad Chaudhry said: “This is why sending Nawaz Sharif abroad was dangerous because such people become a part of international plots.” Sharif’s meeting with “RAW’s biggest ally in Afghanistan is an example of this. Modi, Mohib or Amrullah Saleh (Afghanistan vice president) — every enemy of Pakistan is a close friend of Nawaz Sharif”, he said.

However, the daughter of PML-N supremo said the foundation of Sharif’s ideology was the peaceful coexistence of Pakistan with its neighbors and he had “worked tirelessly” for it.

It is the very essence of diplomacy to talk to everyone, listen to their point of view and convey one’s own message across: something this government doesn’t comprehend and hence is a complete failure on the international front. https://t.co/ZWwXXDf8iz

“It is the very essence of diplomacy to talk to everyone, listen to their point of view and convey one’s own message across: something this government doesn’t comprehend and hence is a complete failure on the international front,” she added.