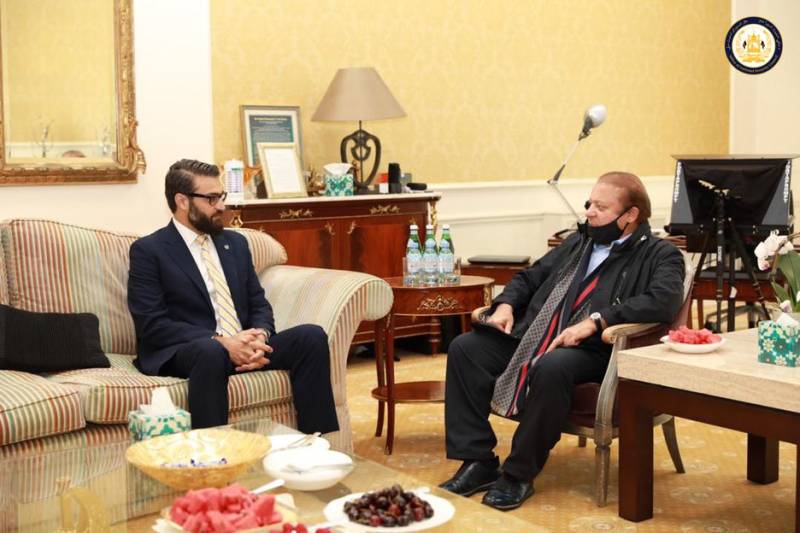 LONDON – Ousted Prime Minister Nawaz Sharif met with Afghan national security advisor in London where both sides discussed 'regional security and stability' amid a rise in conflict following US withdrawal.

The statement further added that “both sides agreed that they would both benefit from the policy of mutual respect and non-interference in each other's internal affairs and ‘strengthening democracy’ will put both neighbors on the path towards stability and prosperity.”

Afghan top advisor has been boycotted by incumbent Pakistani authorities in wake of his controversial remarks about Pakistan.

In the meanwhile, the meeting was held after a violent group of Afghan demonstrators attacked the office of the Pakistan High Commission in the British capital. The attacker not only created a ruckus outside the high commission but also roughed up the visitors.

Furthermore, Afghan officials repeatedly accused Pakistan of supporting the insurgents and preventing the Afghan forces from carrying out military operations.

The relations between the neighboring countries took another hit after the episode of Silsila Alikhel, the daughter of the Afghan envoy to Pakistan who claimed abduction in the country's federal capital on July 16.

Pakistani officials however dismissed her claims. It is a part of an international conspiracy against Pakistan, the country’s Interior Minister told a private news channel. Later, Kabul recalled its ambassador and senior diplomats from Pakistan, demanding punishment for those responsible. Pakistan Foreign Ministry called the act ‘unfortunate and regrettable'.

Nothing new.Nawaz sharif has always kept company of enemies of Pakistan,be it Jindal or Modi. & now Hamd Mohid who called Pakistan a “ brothel”. It’s a shame NS is so insensitive to national self respect.AJK elections tomo people will respond in kind & vote against his party https://t.co/2gRuFJiaWl

"Matters of mutual interest"? Seriously? After Mohib referred to Pak - not PTI govt but r country - as a " brothel", common RAW interest can only be to attack Pak. Such shameless self-interest of Sharif to preserve looted wealth & country be damned. & Maryam's retweet support pic.twitter.com/JR8fcRy0Lu

Birds of a feather flock together. Nawaz Sharifs meeting with Afghan NSA proves his connections with Pakistan's enemies. Again proved that Nawaz Sharif is a tool to be used against Pakistani interests. His statements on crucial issues already used by India at global forums. pic.twitter.com/qEvCwHwqSq

For Nawaz Sharif to meet the Afghan NSA, Munib, only a few days after Munib called Pakistan a ‘brothel’ was a terrible insult to the Pakistani nation. Now, more than ever before, it is clear to me that we are well rid of this man.

Interesting development
Afghan NSA @hmohib and State Minister Sayed Sadat NADERI met Nawaz Sharif in London.
Mohib is one of Anti-Pakistan Afghan officials and considered a CIA man.
Pakistan must be watching closely.
This meeting with ex Convict PM who is anti Army is critical pic.twitter.com/DPR49Mwoa2

The guy who calls Pakistan a hera mandi and brothel is meeting with Nawaz Sharif. If still people think Nawaz Sharif is loyal to this country then they should definitely consult a mental therapist. https://t.co/zXwjEwM6u6