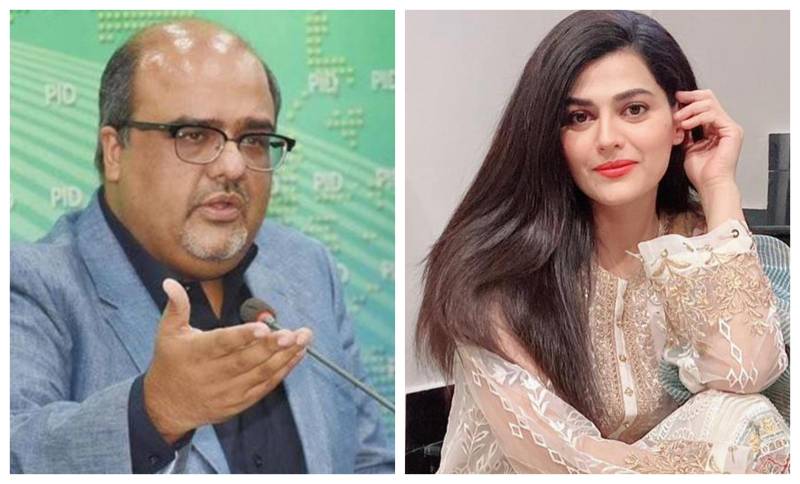 Shahzad Akbar and Sofia Mirza, whose real name is Khushbakht Mirza, are best friends and Shahzad Akbar used his powers as one of the most powerful ministers of Imran Khan govt to attack Umar Farooq Zahoor by linking him to former DG FIA Bashir Memon as well as using the FIA powers to bring him down.

In June 2020, Sofia Mirza launched a a complaint at the the Federal Investigation Agency (FIA) Lahore’s Corporate Circle about an alleged fraud and money-laundering of around 16 billion Rupees from a concerned citizen Khushbakht Mirza about the Dubai-based Pakistani-Norwegian businessman Umar Farooq Zahoor. FIA sources have said that Shahzad Akbar guided Sofia Mirza to make the complaint so FIA could be used against Umar Farooq Zahoor.

The complaint made its way to the PTI govt’s cabinet agenda via the Interior Ministry, being run by Assets Recovery Unit (ARU) Chairman Mirza Shehzad Akbar. The federal government gave a go-ahead to the FIA to probe the alleged fraud of over 16 billion Rupees by Umar Zahoor and his relative Saleem Ahmad.

The cabinet was told by the Interior Ministry that two separate cases have been registered against Umar Farooq Zahoor by the Corporate Crime Circle of the FIA after completing inquiries in both cases and during the inquiries it came to light that Umar Farooq Zahoor and the co-accused had allegedly committed a bank fraud of $89.2m in Oslo, Norway, in 2010 and another fraud involving an amount of $12m in Bern, Switzerland, in 2004.

In her complaint to the FIA, the concerned citizen Khushbakht Mirza didn’t reveal she was known as model and actor Sofia Mirza and she also didn’t disclose that Umar Farooq Zahoor was her former husband.

This publication has obtained a copy of the original complaint by actress Khushbakht Mirza made before the FIA in June 2020 which triggered action against Mr Zahoor.

She alleged that Umar Farooq Zahoor and his family were involved in money-laundering; had committed “crimes and frauds in different countries including Norway, Oslo; defrauded a bank in tune of $20 million dollars; was convicted and wanted in Norway; committed fraud of $120 million in Switzerland; was involved in smuggling of minors; committed fraud of 9.37 million Turkish Lira; executed shady deal of $510 million in Ghana; owns millions of Dollars in cash in the shape of black money and many houses and properties in Dubai and Pakistan worth hundreds of millions of Dollars including in Dubai’s upper class districts, Sialkot, Gwadar and Islamabad."

She also accused the businessman of being involved in gold smuggling, owning expensive watches, keeping millions of rupees and gold at home and bank lockers in Dubai, owning Rolls Royce, Mercedes and BMW and accused him of illegally getting “billions of Rupees” in fraud from various countries; defaming Pakistan and trying to defraud businesses in Pakistan. She asked the FIA to “please initiate inquiry against this hardened criminal for the sake of country name and billions of Rupees fraud”.

The cabinet didn’t ask any questions before approving the summary presented by Shahzad Akbar. The Interior Ministry didn’t tell the Cabinet that the complainant Khushbakht Mirza, known in showbiz industry as Sofia Mirza, was actually the former wife of Umar Farooq Zahoor and that they have been at war over their two daughters who have been living with at their free will with their father in Dubai. Twin sisters Zainab and Zunerah have told the UAE Shariah court they want to live with their father. They have bene living with their father in Dubai since 2008 after the couple ended up in a divorce.

The cabinet was not informed that the Supreme Court of Pakistan and a Shariah Court of United Arab Emirates had already settled the matter of custody of the couple’s two daughters Zainab and Zunerah. Before the registration of two corruption cases, Ms Khushbakht had also managed to get a case registered against Mr Umer Farooq Zahoor and others for kidnapping his own daughters. The FIA, despite being cognizant of the fact that it is a settled law of country that case of abducting own children cannot be registered against any of the parent, proceeded with registration of case against Mr Umar Farooq under instructions of Shehzad Akbar, who was at the time Special Assistant to Prime Minister Imran Khan.

After the Federal cabinet approved the summary, FIA Lahore Chief Dr Rizwan started action against Umar Farooq Zahoor: his name was placed on the Exit Control List (ECL); non-bailable warrants in one of the FIRs were obtained from the Court without fulfilling the legal requirements and on the basis of said non-bailable warrants, his passport and CNIC were blacklisted and Red Warrants were issued through INTERPOL.

The Additional Session Judge Lahore Rafaqat Ali Gondal vide his order dated 29.03.2021 set-aside the non-bailable warrants issued earlier as same were obtained without following the mandatory legal procedure provided under Criminal Code. The Court observed that Section 87 and 88 of CrPC 1898 provide a complete procedure which has to be followed before declaring any accused person to be a proclaimed offender and proper notices have to be issued to the accused person before issuing perpetual warrants against him or declaring him a proclaimed offender but in this case “no such notice has ever been issued to the applicant”.

The court observed that any criminal proceedings against Mr Zahoor is being the ambassador at Large for the republic of Liberia since 2019 for the regions of Middle East and South East Asia including Pakistan he enjoys immunity under Article 29 and Article 31 of Vienna Convention on Diplomatic Relations which provides immunity to the ambassadors and diplomats against all kinds of criminal prosecution, arrest and detention.

The FIA challenged the said order before the Supreme Court of Pakistan where it was upheld. The malafide of FIA reflects from the fact that despite the aforesaid orders of Superior Courts, the FIA has so far failed to withdraw the illegal Red Warrants. It is worth noting that Mr Zahoor has also filed a Contempt Petition against the Secretary Interior and others for not implementing the Order of the Lahore High Court.

A recent court order has again exposed how the FIA officials acted outside of the law to go after Umar Farooq Zahoor while Shehzad Akbar and FIA’s Lahore Chief Dr Rizwan conspired with Sofia Mirza to hunt down Umar Farooq Zahoor at any cost. Despite the clear orders of the Lahore High Court that Mr Zahoor being ambassador at large for Liberia enjoys diplomatic immunity, the FIA again issued a Diffusion Notice against Mr Zahoor and his brother in law Saleem Ahmad on the pretext of active non-bailable warrants against them in cases of corruption. To save himself from the illegal FIA action, Umar Farooq approached Judicial Magistrate Lahore in the court of Ghulam Murtaza Virk who heard the case.

The court order reveals that FIA effectively lied to the Interpol that it had permission of the same court for action against the businessman and issued Diffusion Notice in pursuance of the said permission. Judge Mr Ghulam Murtaza Virk noted that “from the bare perusal of reports it reveals that in both the cases FIR 36 of 2020 and 40 of 2020 neither any non-bailable warrants of arrest have been issued from this court nor any report has been submitted by FIA. Therefore, the stance taken by the FIA authorities in diffusion letter written to Interpol that challan in both the cases have been submitted before this court is against the record.”

Umar Farooq’s name was mentioned in breaking news headlines when the PTI government had a fallout with Bashir Memon, the former DG FIA, who publicly alleged that he was asked by former PM Imran Khan to cook up cases against Maryam Nawaz, Khawaja Asif and others - and was sidelined and removed when he refused to abide by any illegality.

In March 2022, it was reported in charge sheet against Memon that he had facilitated illegal Pakistan visits of Umar Farooq Zahoor, against whom there was a pending Red Arrest Warrant and a request to INTERPOL for his arrest. Media at the time had linked Zahoor with Memon and raised the issue of alleged corruption but none had any idea that at the heart of the whole controversy is a broken marriage and custody battle of two daughters.

Umar Farooq Zahoor’s lawyer said: “It is apparent from the orders of the Court that the FIA has personal axe to grind against Umar Farooq Zahoor and malicious campaign and prosecution is being run against him for extortion of money.”

Umar Farooq Zahoor believes that his former wife used her connections with Shehzad Akbar, the former Chairman of the Assets Recovery Unit (ARU) of Pakistan who controlled FIA, to initiate action against him.

Swiss authorities confirmed that on 7 December 2020 the case against Umar Zahoor was dropped without any further action due to lack of evidence and the issue of time-bar.

About the same case, a Turkish citizen Erhan Kanionglulari had made a complaint in 2005 to Pakistan authorities and on request of the Turkish embassy a probe was started against Umar Zahoor. The Turkish national had alleged he was the victim of alleged fraud in Switzerland to the tune of 9.73 million Euros.

The National Accountability Bureau (NAB) started an inquiry into Umar Zahoor and the Turkish national visited Pakistan to assist the inquiry but gave no evidence to back up his claims and even then the NAB went on to investigate Umar Zahoor. After finding no poofs of corruption, the case against Umar Farooq Zahoor was closed by the Accountability Court Karachi in August 2013, giving him a clean chit.

A case was registered against Umar Zahoor in Norway in 2010 on the allegation that some bank officials of Nordea bank of Norway colluded with some private persons to fraudulently deprive Randi Nilsen of 89.2 million Norwegian Kroners and transferred the same to UAE banks. In May 2020 the Norwegian authorities closed the case over lack of evidence.

The Public Prosecutor of Kenton Zurich Mr Jean-Richard-dit-Bresssel confirmed: “It is decided the criminal case against Umar Zahoor for fraud is discontinued.” Official papers of Switzerland government confirm that arrest warrants issued by the Interpol against Umar Zahoor were deleted in March 2021 after the closure of the investigation.

Official papers of the Oslo police confirm that the case against Umar Farooq Zahoor was dismissed on 12 May 2020. “The case is dismissed since it is assumed there is no reasonable grounds for investigation whether a crime has been committed, cf. the Criminal Procedure Act 224 1st Paragraph,” said the Oslo Police District.