Roads reopen after TLYR announces to end sit-ins across country 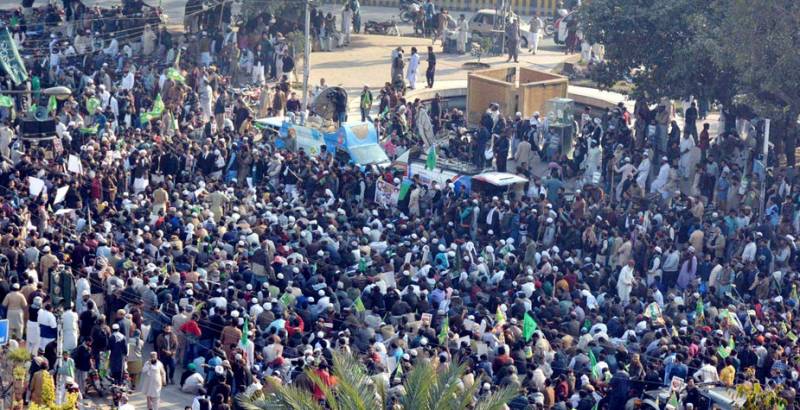 Different religious groups and supporters of TLYR's workers had blocked several major roads in different cities to express solidarity with the sit-in staged at the Faizabad Interchange paralyzing the routine life.

The announcement follows a deal signed by the government and Islamabad protesters on Sunday after Law Minister Zahid Hamid tendered his resignation to Prime Minister Shahid Khaqan Abbasi. However, the prime minister earlier today accepted the resignation.

Addressing a press conference in Islamabad, Rizvi expressed that the sit-ins staged in different cities across Pakistan should also be called off as the group had inked an agreement with the Pakistan Muslim League-Nawaz (PML-N) government.

He added that the Faizabad Interchange will be vacated within 12 hours following the deadline, which was given by the government.

In Karachi, the protesters have ended the sit-ins staged at different points in the city. Roads in Numaish Chowrangi, Sohrab Goth and in other areas of the metropolitan have been reopened.

Following the announcement, the goods carrier association has also announced to restore the supply of goods halted due to the protest.

Earlier, the Sindh government had announced two days holiday (Monday & Tuesday) across the province for public and private institutions due to the prevailing tension. Now, it is expected that Tuesday's holiday would be withdrawn restoring routine life in the province.

In Peshwar, the roads are also being reopened after the religious protesters started dispersing following the announcement of Rizvi.

The protesters in Lahore have denied ending the sit-in untill the resignation of provincial Law Minister Rana Sanaullah.

Following the situation, the provincial government has announced a two-day holiday for all public and private schools across the province.

The Pakistani government and Tehreek-e-Labbaik, which had been staging a protest sit-in in the federal capital for the past 21 days, have signed an agreement – brokered by the Army – putting an end to the escalating wave of tension across the country.

While the PML-N government appears to have surrendered to all the demands by the protesting side after certain assurance of not resorting to violence, the truce pact also makes the religio-political party bound to refrain from issuing any fatwa (decree) against Law Minister Zahid Hamid – the man blamed to have introduced the controversial ‘Khattam-Nabuwwat amendment’ in the Election Reforms Bill.