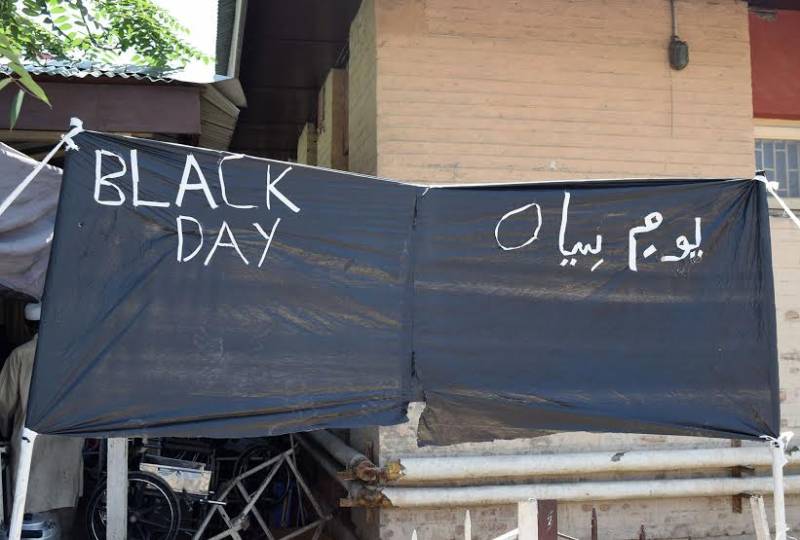 ISLAMABAD - A Black Day observed today (Oct 27) by Kashmiris on both sides of the Line of Control and all over the world against forced and illegal occupation of Jammu and Kashmir by Indian forces.

Against the Indian suppression, a complete shutdown is being observed in Occupied Kashmir and rallies are being held in world capitals to expressed solidarity with people of Kashmir.

On the occasion, the Pakistani government has expressed complete solidarity with the defenseless people of Kashmir, who are facing state terrorism against their demand of self-determination right.

President Mamnoon Hussain said that the people of Indian occupied Jammu and Kashmir are engaged in a struggle for the realisation of their right to self-determination against forces of tyranny and foreign occupation.

Linking the Kashmir issue with regional peace, the President pressed India to implement the UN resolutions in order to end the decades-long dispute.

In a separate message, Prime Minister Shahid Khaqan Abbasi paid tribute to the sacrifices of Kashmiris and reiterated "unflinching and steadfast moral, diplomatic and political support for the just cause of the people of Jammu & Kashmir".

He added, "This support will continue till the realisation of the lawful right to self-determination of the people of Jammu and Kashmir.”

The PM also called for an independent, transparent and fair investigation into these human rights violations under the United Nation.

Despite killing and blinding thousands of Kashmiris, the Indian forces are unable to shake their firm stand to be part of the Pakistan. Only in September 2017, Indian forces killed 22 people.

A new wave of state terrorism engulfed the Kashmiris, especially women when incidents of braid chopping started happening in the valley.

The freedom movement had got momentum with the martyrdom of Burhan Wani, a young Kashmiri leader, during last year.

October 27, is observed as the Black Day as India forcibly occupied the land of Kashmir on that day and denied the right of self-determination.