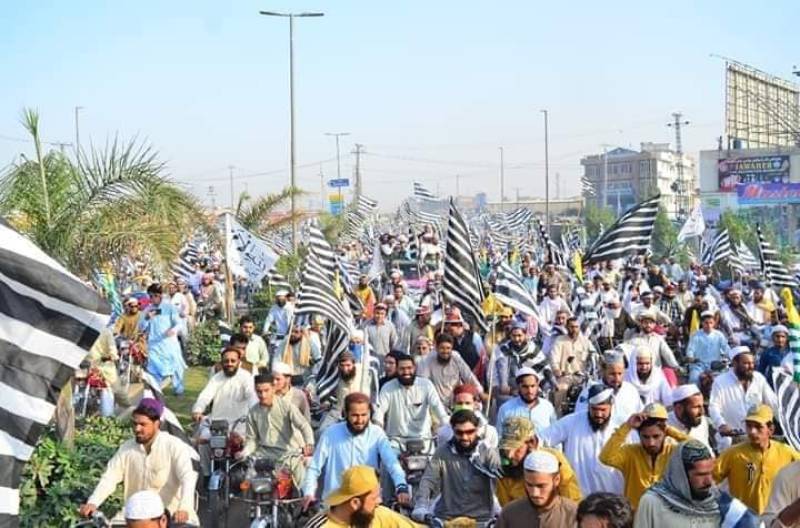 KARACHI - Thousands of people, led by the Jamiat Ulema-e-Islam–Fazl (JUI-F), on Sunday began their so-called Azadi March towards the Pakistani capital city to oust Prime Minister Imran Khan "for failing to run the country properly".

JUI-F chief Fazlur Rehman, who is backed by nearly all mainstream opposition parties, kicked off his grand march from Karachi's Sohrab Goth area. The religio-political party, which failed to sustain its key constituencies in last general elections, blames the ruling Paksitan Tehreek-e-Insaf of rigging the polls.

The Azadi or 'Freedom' March, which coincides with Kashmir Black Day, is expected to draw hundreds of thousands of people, mainly the students of religious seminaries (madrassas). The protesters believe that the 'inexperienced' government of Imran Khan has pushed the country's economy towards decline due to its 'mismanagement' and 'gross negligence'.

The convoys of Pakistan Peoples Party, Pakistan Muslim League-Nawaz, and other opposition parties have also joined the march.

The Azadi March officially started after Maulana Fazl addressed the participants, expressing solidarity with the people of Indian Occupied Kashmir.

Earlier today, JUI-F leader Mufti Kifayatullah was arrested from Islamabad for issuing derogatory statements against the state institutions in his provocative speech.

According to media details, the law enforcement agencies and Mansehra Police in a joint operation took the JUI-F leader into their custody from Islamabad’s Sector E-11 and shifted him to Central Jail Haripur.

The JUI-F leader was arrested under 3-MPO by Mansehra police.

On Saturday, the citizenship of JUI-F's Senator Maulana Hafiz Hamdullah had been cancelled by Nadra, declaring him a "confirmed alien".

LAHORE – The citizenship of Maulana Hafiz Hamdullah has been cancelled by Nadra and declared the former JUI-F senator ...

Moreover, Pakistan Electronic Media Regulatory Authority (Pemra) had directed TV channels not to invite Maulana Hamdullah as a guest in their TV shows.

Talking to media, along with members of the committee and the government delegation in Islamabad, Pervez said that the Rehber Committee of the opposition has assured the government for a peaceful protest, adding that under the agreement JUI (F) will not hold its march and protest towards D-Chowk and participants of march will remain at the open ground of H-9.

He said that the government believes in the democratic process in the country and staging of protests are the right of the opposition according to the constitution.

He said that the government has also been assured that the participants of March will not violate the law and will record their protest in a peaceful manner.

He said they will also ensure to implement the decisions of the High Court and Supreme Court.

Akram Durrani, head of the Rehbar Committee, had said the Azadi March will not be prolonged, adding that further decisions will be taken according to the situation.

He had reiterated the party's demands, including the resignation of the prime minister, new elections without the interference of the military, and the protection of Islamic clauses within the Constitution.