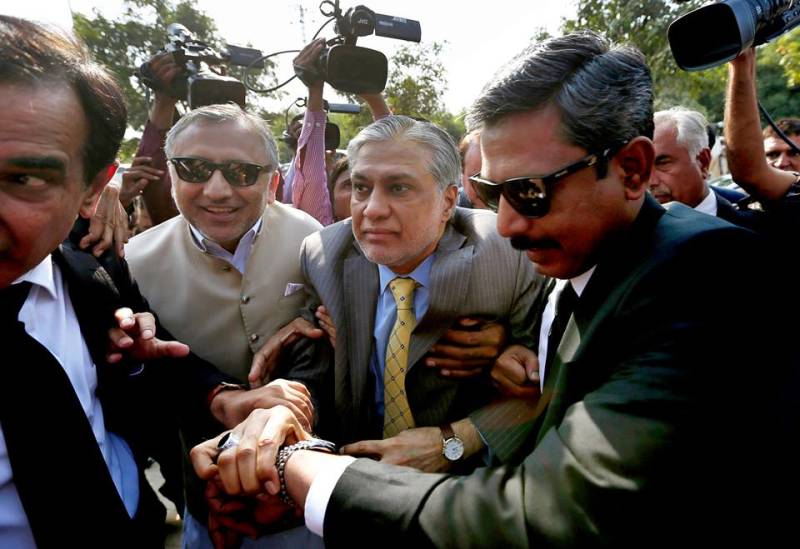 ISLAMABAD - The Accountability court on Wednesday chargesheeted Fiance Minister Ishaq Dar in a reference filed by the National Accountability Bureau (NAB) against him for possessing assets that exceed his known sources of income.

Judge Mohammad Bashir has resumed the hearing and read the points of accusations in the court.

However, the Finance Minister rejected the allegations, adding that he will defend them in the court and prove his innocence.

During the hearing, the NAB submitted a list of 28 witnesses, including two bank officials belonging to Lahore, to prove the allegation.

On next hearing, the court has summoned two of the witnesses to record their statements.

The counsel for Dar also submitted an application seeking exemption for his client from personal appearance, but the NAB opposed it.

After hearing the arguments, the court adjourned the hearing till OCtober 4.

Strict security measures were made around the federal judicial complex ahead of Dar's appearance, while entry of media persons, lawyers and other parties, who want to attend the hearing of their respective cases, was banned.

The police also closed the main door of the complex due to which a huge crowd gathered at the gate. Dar also faced hardship while entering the premises.

The security officials moved the vehicle of the finance minister towards the rear gate of the complex from where he reached the court.

During the last hearing on September 25, the court provided a copy of the reference, comprising 23 volumes to the respondent.

Amjad Pervaiz, counsel for Dar to adjourn hearing for seven days so that he could review the reference, but the request was turned down and September 27 announced as the next date of the hearing.

On September 20, the accountability court had issued arrest warrants for the minister after he failed to appear before the court to attend the hearing.

After the issuance of arrest warrants, the NAB team raided the minister's house in Islamabad and questioned employees while telling them that they had an arrest warrant for the Federal Minister.

Ishaq Dar is facing Section-14C of the NAB Ordinance 1999, which deals with possession of assets beyond his known sources of income. If Dar is proven guilty, he would be handed over 14-year imprisonment.

According to the NAB reference, a 91 percent increase was observed in his assets in a short period of time.  Dar and his family possess assets worth Rs 839 billion, the reference said.

The accused was summoned to the joint investigation but he did not appear citing a review petition against the Panamagate verdict in the Supreme Court, the reference stated.

Earlier, the NAB had submitted a reference against the minister to the court in Islamabad, but the registrar sent the reference back to the anti-graft watchdog terming it incomplete and ordered to attach additional documents.

The Supreme Court while announcing the landmark decision of Panamagate case, which caused the ouster of Nawaz Sharif on July 28, had ordered the NAB to file references against the Sharif family and Ishaq Dar within six weeks. It also directed the NAB to decide the references within six months.