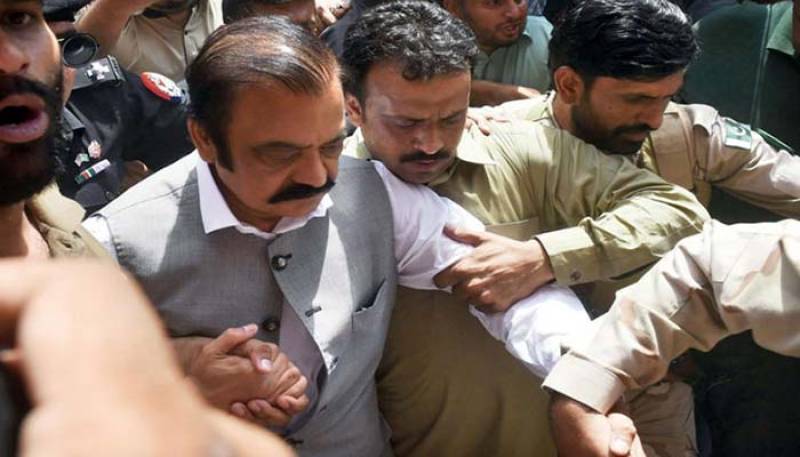 LAHORE - Judge Masood Arshad of Anti-Narcotics Force (ANF) court, stopped hearing a case filed against Rana Sanaullah midway after learning that he had been repatriated back to the Lahore High Court (LHC).

The judge was conducting the hearings on Wednesday, however, stopped the proceedings and said he had been informed through a Whatsapp message about the development.

"I have just received a Whatsapp message, the Lahore High Court has repatriated me. I cannot lend my expertise to this case anymore," judge Masood Arshad said during the hearing to everyone's surprise.

Amid suspicions about the reason behind the move, a notification issued by the Ministry of Law and Justice dated August 26 emerged online according to which three accountability judges; Masood, judge Mushtaq Ilahi, and judge Muhammad Naeem Arshad were recalled. 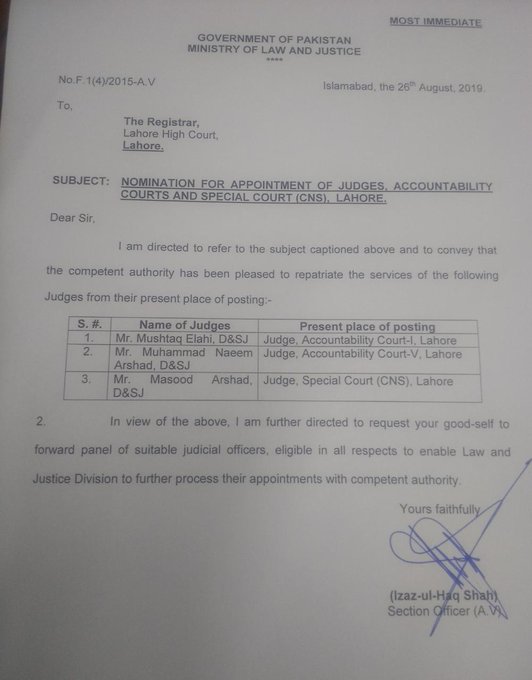 The order for Arshad's repatriation is from the same day when a seven-member administration committee of the LHC held a closed-door meeting to decide the fate of former accountability court judge Arshad Malik.

Meanwhile, the counsel for Rana Sanaullah termed the development unprecedented, alleging that apparently, the government was trying to decide which judge they want the verdict from.

He said that arguments had been concluded in the case when the government decided to withdraw the judge.

Meanwhile, Pakistan Muslim League Nawaz Spokesperson Marriyum Aurangzeb dubbed the repatriation as a direct attack on the freedom of judiciary.

Besides Arshad, the judge Naeem Arshad was also hearing high-profile cases as he was the duty judge currently presiding over the Chaudhry Sugar Mills case against Maryam Nawaz and her cousin Yousuf Abbas; the Ramzan Sugar Mills case against Shehbaz Sharif; and money laundering cases against Hamza Shahbaz and Salman Shehbaz. He had been tasked with hearing these cases as the main judge was on summer holidays.

Judge Ilahi was not hearing any high-profile cases but was on the benches hearing a number of National Accountability Bureau cases.

Rana Sana Ullah was arrested by the Anti-Narcotics Force in July over his alleged links with drug-peddlers and banned outfits; the politician denies the allegations.

The president of Pakistan Muslim League-N’s Punjab chapter was picked up from Motorway near Sukheki while he was on his way to Lahore from Faisalabad.