A Pig’s Life in the Kingdom of Dog 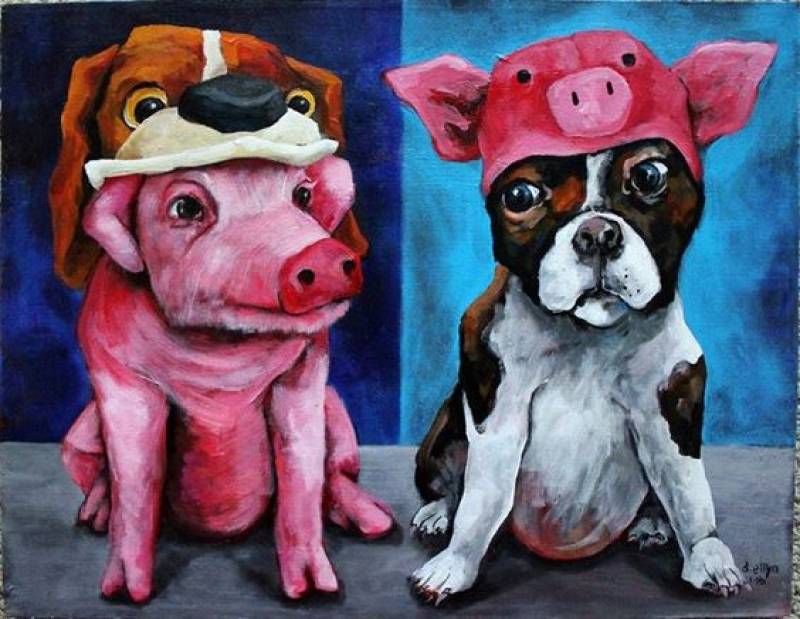 The pig, however innocent an animal it may be for the world, for Muslims it is not only an ugly and repulsive creature, it is also very, very haram. It is in fact far haramier than many a haram stuff, like adultery, killing fellow Muslims, being usurper and cruel to women and children – all of which we as Muslims love to revel in and practice like our religious duty.

Our extreme and inexplicable hatred for this poor soul notwithstanding, our ‘bestest’ political friend Chinese like it more than we like goat and chicken.

But this piece is neither about the rights and privileges of a pig in the kingdom of animals, or in the Islamic Republic, nor about the benefits – or harms – of consuming pig for dinner.

This piece is about another, almost haram thing for many Muslims with weaker faith, i.e., attempted fortune telling.

Since our military and political leaders want us to be prepared for Chinese investments, along with their language and culture, we must offer you a social orientation about the Chinese New Year – which is an important part of their traditional as well as pop sub-culture.

For some strange reason, the Chinese New Year is called lunar by the Western world. It is not exactly a lunar calendar like our Islamic year. Nor is it solar like the Gregorian calendar. It can neither be called a blend of the two because it predates both. So it is called lunisolar.

The Chinese New Year mostly falls in February. This year it started around Valentine ’s Day. On average, in Chinese calendar a month has 29.53 days, but the year has 365.24 days. So, as an American would say, it’s the same difference.

Each year in the Chinese calendar is associated with one of the 12 animals viz. Rat, Ox, Tiger, Rabbit, Dragon, Snake, Horse, Sheep, Monkey, Rooster, Dog, and the Pig. Therein, every animal has five subtypes, i.e., Wood, Fire, Soil/Earth, Metal, and Water.

On both 14 and 15 August 1947, it was the year of the pig, and within that, it was the Fire Pig.  No, no, India is not a Pig, because it was already there; only, we were born out of it. And, as a matter of fact, India predates the discovery and evolution of Chinese signs, so we don’t know what it is! However, a pig cannot come out of an angel, so India is something close too!

Now, 2019 will be the year of the Pig, but of the Soil/Earth Pig.  In 72 years of our independent existence, we are all set to make a full circle from Fire to ashes (a form of the earth if you please).

As per Chinese mythology, Pig and Dog have an average match and an okay friendly relation.

Pig has greater unison and harmony with Rabbit and Goat, but no match with Snake. We have had six years of the snake since 1947. All were quite tumultuous, politically speaking.

They say that anyone born with this sign will be intuitive and emotional. Isn’t that spot on?

In the year of the Dog, those with the Zodiac sign of Pig can face a financial crisis. Unless the inclusion of this line is sponsored by IMF, it seems Pakistan will have a debt problem. But, the forecast says, ‘an efficient plan of managing money’ will help emerge out of the crisis. This may mean, Mr. Dar can be back as the Finance Minister.

They say, those with the Pig sign will have stable marriages; i.e., Khan Sahab may end marital pursuits; and Capt. Safdar can also expect to remain in office as the potential first husband.

The interpersonal (read, international) relationships will also be stable and harmonious. That to me means, Mr. Trump is going to be impeached, Modi Sb is not getting reelected, and after all, we may not be put on the watch list by the FATF.

If all these things come true, it’s neither piggy nor doggy fate, and Pig will be a happy customer under the aegis of Dog.

Arshed Bhatti is a typical Pakistani who operates at very high level of confidence with extremely low level of knowledge. Being true Muslim he believes the real life is in the hereafter and urges countrymen to take it easy, and ...