End of the night for Junoon, a new dawn for Pakistan 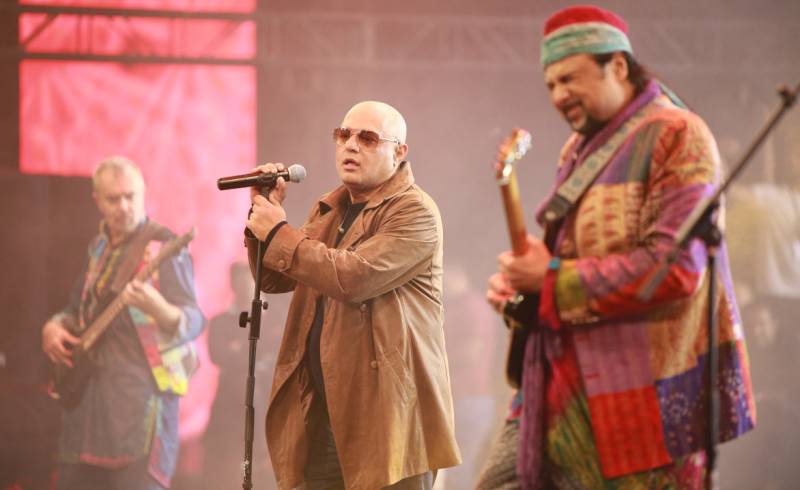 “Ray. People will come, Ray. They'll come to Iowa for reasons they can't even fathom. They'll turn up your driveway not knowing for sure why they're doing it. They'll arrive at your door as innocent as children, longing for the past. "Of course, we won't mind if you look around", you'll say, "It's only $20 per person". They'll pass over the money without even thinking about it: for it is money they have and peace they lack."

The crowd is in a frenzy and these lines from Field of Dreams come to my mind as Junoon comes on stage. It was speculated earlier that ticket sales were low because of prices, but Moin Khan Stadium is almost full.

Junoon is a band that has played everywhere. From jam packed audiences in Multan to overflowing venues in Denmark. They have proven themselves in studio and on stage for well over a decade. Wrongly classified as pop in the mainstream media in the 90s, Junoon introduced rock music to the average Pakistani, even in small cities and semi rural areas, Junoon is the quintessential Pakistani rock band that successfully imported rock music for the masses and invented a new genre called Sufi Rock in the process. This is people's rock.

For a band that belonged to the masses, Junoon played a very inaccessible gig for their grand reunion last night. With the cheapest ticket priced at PKR 5000, I wouldn't even dream of attending it if I were a student, which I was in the 90s and early 2000s when I attended Junoon concerts. I remember, in those days buying concert tickets even for reasonable prices of 500-1000 was a task.

A ticket of 5000 is a filtration process though. With a ticket of 5000 you ensure the average age of 30 of a fan who now has a reasonable job and a strong yearning for nostalgia of the 90s, you ensure that queues will form automatically in front of bathroom and that, probably, girls won't be sexually harassed at the venue. It is quite surprising that the young urban Pakistani is so far behind civilization when it comes to concert ettiquete. It’s an incredibly elitist thing to say, but with 5000, you filter that a bit.

Overall, however, this was a very well organized event. Everything was clear and security was perfect. Credit goes to the organizers and sponsor, Peek Freans Sooper, for organizing things so well. They created a safe space for women and girls where they could comfortably enjoy music in a concert enviorionment, which is rare. It is important that women don’t constantly feel anxious in such public spaces. If more concerts can be organized like this, Sooper Junoon could kickstart a new era of concert culture in Pakistan.

But, back to the meat of the matter.

We need to know the context to understand the meaning of this concert. Imran Khan is the Prime Minister of Pakistan, Nawaz Sharif is in Jail, Asif Zardari might be next. Junoon, a band that popularized the word 'Ehtisaab' with an immortal rebellion song, a band that was censored by both PPP and PMLN, a band that captured the imagination of the 90s urban middle-class kid, is back in action. Pakistan may be as bad as ever, but for the urban middle class 90s kid that was desperate to elect Imran Khan, the stars are aligned. This band represents the hopes and dreams of that generation. So, if you were standing in the crowd last night listening to it live after 13 years, you could hear the fans louder than Ali Azmat's powerful voice. Throughout most of the concert, Ali Azmat's voice was just a part of the crowd, everybody knew the lyrics, everybody could sing it perfectly due to years of practice, and nobody could stop themselves from doing so.

Ali on vocals, Salman on guitars, Brian on bass. This is Junoon. Omran Shafique, Kashan Admani, on guitars, Ustad Aashiq Ali Mir and his son, Faisal Ali Mir on Dholak, and a guest drummer from Tappan, NY on drums also accompanied the band - the lineup seemed perfect. The set list was perfect too, one Junoon hit after another. Starting off with 'Junoon Say Aur Ishq Say' from the 1997 Album Azadi, and the OST of the movie Jinnah, setting the tempo and the mood for the night, then moving on to Zamanay k Andaaz, Khudi, Sayonee - all the songs that are not just Junoon's hits, but an essential part of Pakistani music history now. Junoon played them all perfectly, answering the most important question for the night: Do they still have it? And the answer is, yes they do.

Going in, my biggest concern was: can Salman Ahmed still play? Short answer is, yes he can. When Junoon broke up in 2005, Salman and Ali went on to their solo careers. While Ali made great music as a solo artist, Salman's music career crashed. Throughout his solo career his personal output remained, frankly, awful. It had long been rumored that Salman Ahmed had forgotten how to play, with his biggest detractors going as far as claiming hes has lost his mind too. But as a witness to last night's events, I can report to you that he can still play the guitar like he used to. He can still play a mean solo and he can still mesmerize the crowd with his six-stringer.

The best version of Saeen is the one that is on Daur e Junoon album - the live version that they played Live at Roskilde Festival in Denmark. They played the same one last night with the same energy (maybe Ali has less strength in his voice now, or maybe the sound wasn't too good at the back?) but with the same vibe that made a Junoon concert back in the day.

Neend aati Nahi and Khawwab got us emotional again, the tribute to Junaid Jamshed brough us to tears, and Sajna got us back to our feet again. The highlight of the night, however was Dosti. This probably was the best version of Dosti that Junoon has ever played, past or present. That song alone was worth all the money, worth the long wait. We were young and we wore school uniforms. We went to school picnics and we sang Dosti on the bus. We grew up with friends that we sometimes lost on the way and somtimes remained in touch with. Maybe some of them were there last night. In 2001, the war started, Junoon broke up not long after. All those years, concerts almost stopped. Just when the middle-class 90s kid was about to afford better concerts, had good friends they had been closer to for some time, or wives or dates, War on Terror changed the whole fabric of society, took most entertainment away from us. We wasted our youth to that war. The war is winding up now, maybe concerts will start again. So last night, if you were lucky enough to be standing with an old friend from the 90s or early 00s, Dosti wrapped up a whole decade of Junoon's absence.

The war is ending, maybe music will start again? So, what was the meaning of this concert at this time and place in our history. Maybe this is the end of the night for Junoon and Pakistani music industry. Even after all those years Junoon has proven themselves on stage once again, but one question remains, can they do it in the studio? Will they?