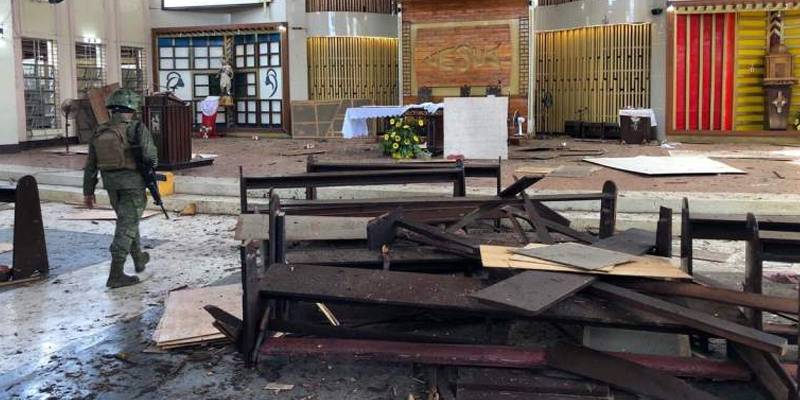 MANILA – The so-called 'Islamic State' group has claimed responsibility for a double bomb attack on a Catholic church on a southern Philippine island that killed 20 18 people, according to the SITE Intelligence Group which monitors terrorist activities.

IS issued a formal communique claiming two suicide bombers had detonated explosive belts Sunday inside the church and its car park on Jolo -- a stronghold of militants in the Catholic-majority nation.

But a military report said the second bomb was left in the utility box of a motorcycle in the parking area outside the church. Police said they believe the explosives were detonated remotely, but did elaborate.

Despite the contradictions, authorities have not ruled out IS involvement.

MANILA — At least 20 people were killed and more than 75 got injured after two bombs exploded outside a Roman ...

The church attack came despite President Rodrigo Duterte putting the southern Philippines under martial rule after pro-IS militants seized the southern city of Marawi in May 2017.

Government officials have argued that martial rule, which gives authorities extra powers, has been effective in taming the perpetually restive region.

Meanwhile, condolences poured in from around the world for the victims at the cathedral, which has been repeatedly targeted by grenade attacks that did not prove fatal.

Pope Francis, speaking in Panama, expressed his "strongest reprobation" for the violence. Once again, he said, "the Christian community has been plunged into mourning."