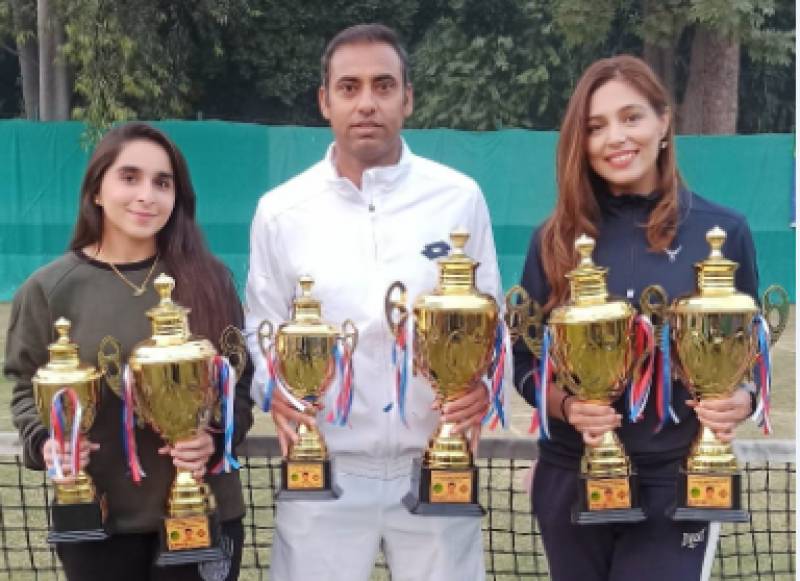 In the men's singles final, Aqeel outpaced M Abid 6-4, 6-1. High quality tennis was witnessed during the final when two national players were engaged in long rallies, sterling serves and powerful shots. In the first set, Aqeel faced tough resistance from his opponent before winning it 6-4 but he won the second one 6-1 comfortably to defend his title. “I am thankful to Allah Almighty for another national title and especially glad to win this grass court title for the fifth time in a row.”

Sarah Mehboob Khan made a good return to national circuit after getting married as she grabbed two crowns in the event. First she routed Noor Malik 7-5, 6-2 to win ladies singles title and then she also won ladies doubles final, where partnering with Noor Malik (Wapda), she defeated Mariam Mirza/Zahra Suleman 6-3, 6-2.

Rashid Malik (ZTBL) also clinched two crowns in the event. First he won the seniors 50 plus doubles crown, where partnering with Fayyaz Khan, he beat Israr Gul (KP Police)/Arif Feroze 6-1, 5-7, 10-8. Then Malik, partnering with Aqeel, won seniors 40 plus doubles crown, which couldn’t take place and was shared between both the pairs, with Nasir Sherazi and Sheharyar Salamat being other pair. Rai Zahid Zafar/Inamul Haq won the seniors 60 plus doubles title by beating Brig Ghazanfar/M Babar 6-2, 6-2.

Speaking on the occasion, Zaheer Abbas said: “I am grateful to tennis coach Rashid Malik for inviting me to the event, which has been named after his late son Shehryar Malik. Malik has great services for tennis as a player, coach and organizer, which can’t be forgotten. I myself kept playing tennis with this legend, who is very passionate about the game and promoting junior tennis in the country, which will benefit Pakistan in the long run.

“Pakistan cricket team is doing well, especially the way they played during the T20 World Cup was really commendable. They played like a unit and their collective efforts helped them excel in the mega event. In the Bangladesh Test, though the team conceded more runs, they are capable of bouncing back and winning the match. Babar Azam is the finest batsman and a good captain and his bat is good enough to silence his critics.”

Pakistan tennis star Aisam Qureshi also paid tribute to Shehryar Malik saying he used to play with him. “Rashid Malik has been doing a great job this event in his name, which is a good way to remember him and it also provide opportunities to tennis players to exhibit their prowess and earn good prize money. I have played good tennis this year and I am among top 50. Next year, I will play two ATP events before featuring in the Australian Open. I am hopeful of doing well next year and winning laurels for my country.”