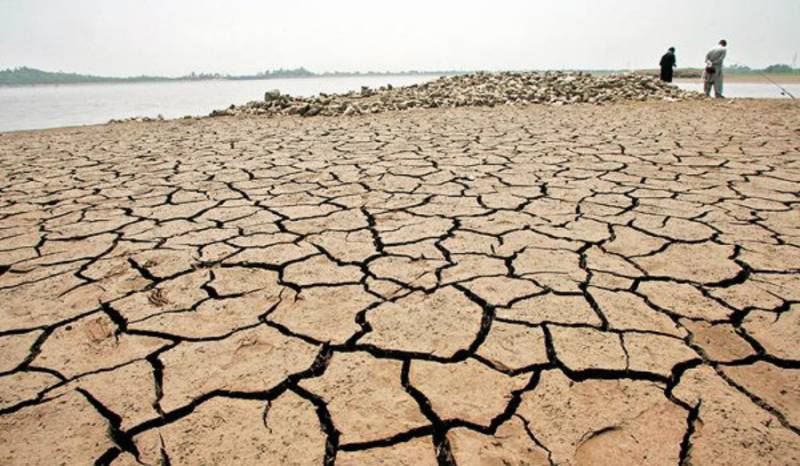 In spite of annual extraction of 74.3 percent of fresh water, 27.2 million Pakistani nationals are deprived of safe water and 53.7 million have no access to adequate sanitation facilities.  Rapid growth in population, extensive urbanization, traditional agricultural practices and industrialization all have put Pakistan on the path of drought, hunger, and instability. The water storage has receded to 30 days which must be at least 120 days as per country’s requirements.

The drastic change in Pakistan’s water-profile is a result of depletion of per capita water availability level which has reduced to 908 cubic meters from 5200 cubic meters in the last seven decades. This shortage of water has earned Pakistan a name in the list of the 15 most water-scarce countries. The land of pure was once rated as a water abundant country, but it did not take long for it to be categorized as a water-scarce country. It’s just a matter of time before Pakistan begins to take this natural resource for granted, as it has become the fourth highest water-consuming country of the world according to the IMF.

Unavailability of modern technology in agriculture and lack of awareness is one of the major causes of ever-rising water deficiency. Pakistan’s most water-intensive agriculture system has minimum production value. The problem’s intensity demands a dire need of extraordinary change at the state and individual levels.

Efficient and judicious use of water in the agriculture sector through the use of advanced techniques and equipment coupled with controlled plantation of the water-intensive crop will help bolster people’s survivability and sustainability in the country. Thar coal power project is a deed of enmity with the country while it faces the severest water crises of all times.

Extraction of fresh groundwater by farmers has become a regular practice now. The contribution of groundwater to irrigated agriculture from 1976 to 2016 jumped from 25.6 to 50.2 MAF and after doubling, 47 percent of the available surface water at the farm head is being extracted from the ground, as per the Agriculture Statistics of Pakistan. It’s unfortunate that most of the country’s population doesn’t even know that annually 91.6 percent of the total used water is consumed by the agricultural sector in Pakistan.

The immense rise in water sparsity demands rapid development in population control, as it is important to realize that water is the only source which can pose a serious threat to the growth.  If population rise kept mounting pressure on the water resources, availability of food, access to education, healthy life would be impossible on earth. People must understand that underground freshwater supplies are finite and its life-giving qualities are irreplaceable. The precipitous drop in water level in Pakistan is a result of an extensive resort of over-pumping of the fresh underground aquifers. Unfortunately, the government’s intention to manage the use of water beneath the surface lacks both will and sincerity. Even in the capital city, Islamabad, where extraction of fresh water is prohibited, people pull underground water by pumping.

Apart from scarcity, the quality of water has emerged as a grave concern in Pakistan over the year. Industrial runoffs and sewage have immensely polluted this precious natural resource, specifically in urban and areas that are heavily industrialized. Consequently, Karachi, Lahore, Islamabad, Rawalpindi, Faisalabad and rest of the major cities of the country they face a tremendous clean water crisis. It has already become oil in cities like Karachi and Islamabad, where buying a tanker full of water is out of majority’s reach since its price has hiked to PKR 2000 from PKR 300 within a decade.

There are various kinds of drinking water impurities in Pakistan: biological, physical and chemical. Of these, biological contamination is the most perilous is immensely harmful since it causes health issues or results in a death. Domestic waste and industrial effluents consist of toxic chemicals and microorganisms which mix in water bodies or leach into freshwater resources.

Agricultural and industrial effluents along with sewage drain in freshwater systems, Indus River tributaries and canals are used for raising vegetables and fodders in semi-urban areas. Unsurprisingly, the produce of contaminated water containing nitrogenous compounds, heavy metals and bacteria are fatal for living beings.

The implications of water outage are extremely devastating at multiple levels. Commencing from the lowest level, one of the most prominent factors of murders in rural areas of Pakistan is water. Here too, a major role is played by the mismanagement, unfair distribution of water, powerful feudal lords and failure of law-enforcing agencies.

The second kind of dispute occurs at an inter-provincial level and these water division crises have ignited amongst the provinces before the partition of the subcontinent. Punjab and Sindh have water division conflict which is deeply rooted since the pre-partition era. While Balochistan and Sindh also have disputes over Kirthar and Pat Feeder Canals. In fact, Balochistan, geographically, is situated at the lower riparian area of Sindh and it can’t utilize the allocated water-share due to inadequate infrastructure. Downstream flow of effluents carrying pollutants which have devastating impacts on the ecology of delta ecosystems and biodiversity is a serious concern now. People must understand that this rising water demand will intensify the disputes between regions and provinces. Therefore, it’s obligatory for the government to allocate just shares while AJK, Islamabad and Gilgit Baltistan should also be included in the water accord to curb any future conflicts.

Indo-Pak water conflict is well known to all. Pakistan’s most of the water comes from India and since India has commenced building dams and their diversion of water in its own land, the animosity has reached to the superlative level.  On the other hand, If Afghanistan builds 12 hydropower projects on River Kabul, it will add to the water crisis of Pakistan as the province of KP banks upon the River Kabul largely.

Water is life and obstruction of the rivers is like blockage of the streamline of a country. Some of the people believe that water is going to take place of oil in near future and most of the wars will be fought for water or by water.

Adequate infrastructure, well-planned management and enforcement of the law can resolve the issue to a large extent. Pakistan has failed to prioritize the need for water and kept procrastinating for a long span of time which resulted in the extreme scarcity of water. Even the minimalistic efforts of building a national consensus were not made while land full of resources turned either barren or flooded by deluges causing loss of thousands of precious lives.

Condoning interconnectivity of SDGs and water depicts the witlessness of policymakers and people responsible. Currently, Pakistan desperately needs water reservoirs and dams. The people responsible for the crisis blame global warming without even admitting the role they played in furthering such a catastrophic phenomenon. The reality is that the role of climate change is far less than mismanagement and negligence of concerned departments.