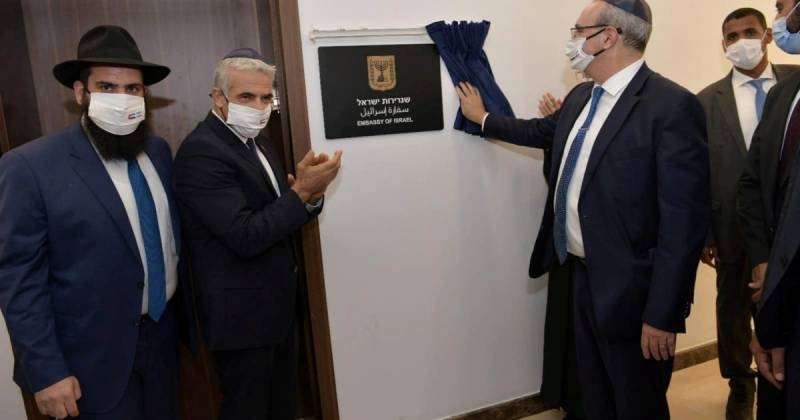 Top Israeli diplomat Yair Lapid inaugurated the Jewish state's first embassy in the Gulf region during a trip to the United Arab Emirates after normalisation of relations between the two countries last year.

"The opening of the Israeli Embassy in Abu Dhabi with the Emirati Minister of Culture and Youth," he tweeted with a photo of himself and UAE minister Noura al Kaabi cutting a ribbon in the blue and white of the Israeli flag.

The ministry described it as a “historic visit” to the Gulf kingdom. Press access to the embassy opening in Abu Dhabi was strictly limited to the state-linked Emirati media.

Israel and the UAE established full diplomatic relations last year under the Trump administration, after the two countries signed the US-brokered “Abraham Accords.”

The UAE was joined by Bahrain in normalising ties with Israel, becoming the third and fourth Arab states to sign peace deals with the Jewish state, after Egypt and Jordan.

In the nine months since the two countries signed the normalisation agreement at the White House, Israel and the UAE have signed trade and cooperation deals, and bilateral trade is already expected to have exceeded $354 million.

More than 200,000 Israeli tourists have travelled to the UAE, according to the Foreign Ministry.

Lapid took office as Israel’s foreign minister after Israel’s new government was sworn in earlier this month. The Yesh Atid party leader struck a power-sharing deal with Naftali Bennett, who became Israel’s prime minister at the head of a coalition of eight diverse parties, ranging from Jewish ultranationalists to a small Islamist party.

Former Israeli Prime Minister Benjamin Netanyahu had repeatedly scheduled and postponed a visit to Abu Dhabi due to the coronavirus pandemic but ultimately cancelled the visit ahead of the March 23 elections due to a diplomatic spat with neighbouring Jordan.

Netanyahu forbade members of his government from travelling to the UAE until he makes a state visit, according to Israeli media reports.

Israeli foreign ministry spokesman Lior Haiat told reporters after Lapid had departed for Abu Dhabi that the pace of bilateral cooperation between the two countries has been “unprecedented.”

“There’s been years of under-the-radar relations between Israel and the UAE, and we are now enjoying the fruits of the infrastructure of peace that we’ve built in the last decades,” Haiat said.

Israel and the UAE had long maintained clandestine security ties before normalising relations last year due to their shared concerns about regional arch-enemy Iran.

That was feted by both sides as a breakthrough in efforts for peace in the Middle East, marked by the El Al jet touching down adorned with the word "peace" in English, Arabic and Hebrew.

The normalisation accords between Israel and the UAE, as well as Bahrain, Morocco and Sudan, have been condemned by the Palestinians.

They break with years of Arab League policy which has held that there should be no relations with Israel until it makes peace with the Palestinians.

In October 2018 Netanyahu visited the UAE's Gulf neighbour Oman along with his wife in a bid to restart the stalled Israeli-Palestinian peace process.

Lapid is a centrist former television presenter who tenaciously hammered together Israel's new coalition, ending Netanyahu's more than a decade as prime minister.

He has sought to break from his rival's policies, saying on Monday that Netanyahu's government had taken "a terrible gamble" by focussing only on ties with Republicans in Washington.