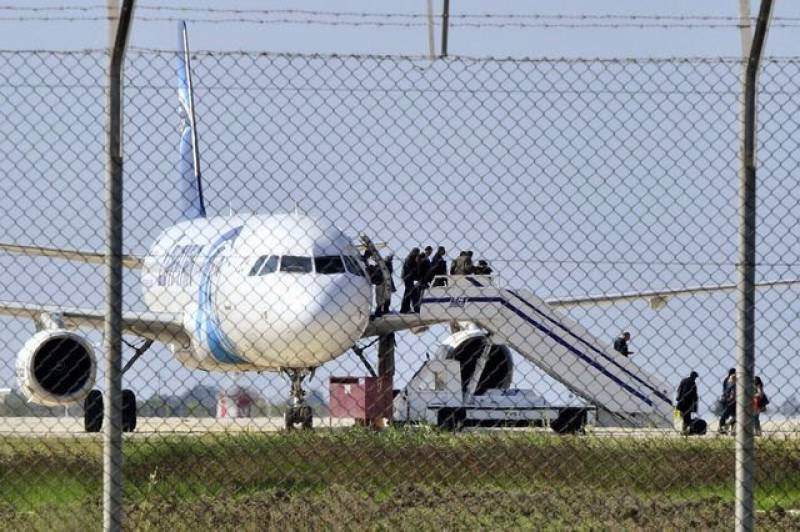 LAHORE (Staff Report) - The world was Tuesday morning horrified to know that a domestic flight of EgyptAir was hijacked by an armed man who forced pilot to divert the plane to Cyprus, but people were greatly relieved when the hijack bid turned out to be a love affair rather than another act of terrorism.

According to Egyptian officials, the plane hijacker was an Veterinary Professor at a university in Alexandria and wanted to meet his ex-wife who was residing in Cyprus. Ironically, the Egyptian Aviation Minister also couldn't preclude himself to say "he is not a terrorist, he is an idiot."

Hundred and thousands others also took it to micro-blogging website Twitter to share their sarcastic thoughts about the 'love of a divorcee.' Some called hijacking new 'love metre' and several others related the incident with historic tales of love.

Here Are Some Selected Tweets:

The man who hijacked a plane to deliver a letter to his ex-wife obviously hasn't heard of Bhagyashree's pigeon. #EgyptAir

There is man hijacking planes for the woman he loves (#EgyptAir).

Next year Valentines Day just red roses will not do.

When a guy hijacks a plane to see his ex-wife and I can't even get a boy to text me back ? #EgyptAir

When getting a new wife is tougher than hijacking #EgyptAir.... !!

A man hijacks a plane to get the attention of his ex-wife. I wonder why she's not with you anymore mate... #EgyptAir #bellend

He; "I can do anything for ya"

News; "EgyptAir Plane has been hijacked"#EgyptAir ?

This idiot hijacking a plane to see his estranged wife ? Why did he not hide in her garden like most normal men ?#EgyptAir #Dickhead

For a change a hijacking took place for love instead of hate. Don't punish the hijacker. Just charge him for the fuel.#EgyptAir

#EgyptAir Now my Girlfriend wants to know if i can Hijack a Space Shuttle for Love.

I won't believe I am in love unless I decide to hijack a plane and demand to meet the girl. Not even kidding. #EgyptAir

New marketing tag line for DHL & Fedex: We deliver your letters swiftly so you don't have to hijack a plane to do it. #EgyptAir

If you've got dimples and beautiful eyes,I will definitely hijack a plan for you #EgyptAir

Bet plane hijackers ex is one ugly bint too,not worth any of the effort. #EgyptAir

Meanwhile the Egyptian officials have said that they were also investigating if the weapons carried by hijacker were real or not.

Now after having read the whole article, you need to read this as well. And it's kind of much serious.

All jokes aside; the fact the #EgyptAir hijacker was able execute this is highly disturbing. We're lucky it wasn't real terrorist attack.