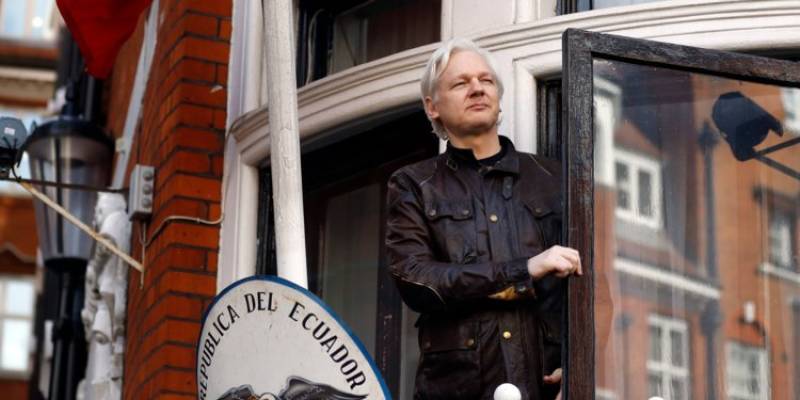 LONDON - The government of Ecuador has blocked internet access to WikiLeaks founder Julian Assange at the nation's London embassy over the recent social media activity of global whistleblower.

In a statement released on Wednesday, officials said  Assange 's recent posts 'put at risk' the good relations Ecuador maintains with nations throughout Europe claiming that it had acted because Assange had breached “a written commitment made to the government at the end of 2017 not to issue messages that might interfere with other states”.

The statement issued by Secretary of Communication stated that the decision to block internet access was taken 'in order to prevent any potential harm.'

Let it be known that as part of an agreement between Mr Assange and the Ecuadorean government, he is not permitted to send any messages that could interfere with the relations of Ecuador relations with other countries.

Though Assange has been vocal on many issues on his unverified Twitter handle, his activity that irked the South American nation was regarding the killing of a spy that became the centre of tension between Russian and the Great Britain.

Assange took to Twitter on Monday to question Britain's accusation that Russia was responsible for the nerve agent poisoning of a former Russian spy in the English city of Salisbury. He also questioned the expulsion of Russian diplomats by Britain and other countries.

(1/3) The manner of and timing of Russian diplomatic expulsions is poor diplomacy. The expulsions occurred 12 hours after one of the worst building fires in post Soviet history, which killed at least 64. Russians will see the timing as gratuitous.

(3/3) Further, while it is reasonable for Theresa May to view the Russian state as the leading suspect, so far the evidence is circumstantial & the OCPW has not yet made any independent confirmation, permitting the Kremlin push the view domestically that Russia is persecuted.

Assange 's tweets drew a strong response from the British Foreign Office minister, Alan Duncan, who said it was time "that this miserable little worm walked out of the embassy and gave himself up to British justice."

To the comments, Mr Assange replied that Britain should come clean on whether it intends to extradite him to the United States for publishing the truth and cease its ongoing violation of the UN rulings in this matter.

'If it does this disgraceful impasse can be resolved tomorrow. I have already fully served any theoretical (I haven't been charged) 'bail violation' whilst in prison and under house arrest. So why is there a warrant for my arrest?' he questioned.

Ecuador gave Assange asylum after he sought refuge in the embassy to block extradition bid to Sweden as he is facing allegations of sexual assault and rape, which he denies.

Sweden withdrew the case, but Assange faces a serious risk of getting arrested in the UK for jumping bail.

LONDON - The government of Ecuador has granted a status of citizen to WikiLeaks founder Julian Assange after he lived ...

Assange believes that Sweden would extradite him to the United States to face prosecution over WikiLeaks ' publication of leaked classified military and diplomatic documents that had shaken the globe.

He has been living at the embassy since June 2012 and Ecuador - having granted him citizenship - has repeatedly tried to sort out the matter to allow  Assange  to leave without the threat of arrest, but the efforts are fruitless to the day.

Interestingly, Ecuador had blocked the internet access to the 46-year-old computer programmer in 2016 as well after he published leaked emails from the Democratic National Committee (DNC) and Hillary Clinton’s campaign adviser, John Podesta.

Moreover, In May 2017 the Ecuadorian president, Lenin Moreno, again urged Assange to refrain from commenting on Spain’s dispute with the separatist region of Catalonia.

At that time, Assange had tweeted that Madrid was guilty of “repression”.