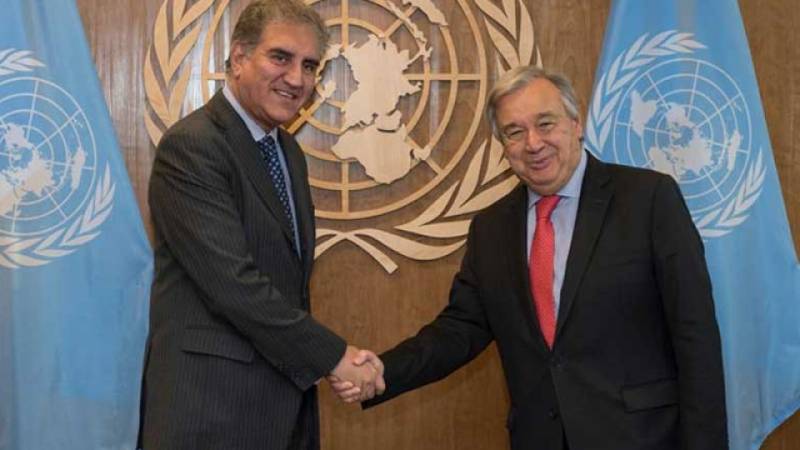 The foreign minister met the UN chief on the sidelines of the 73rd session of the U.N. General Assembly session taking place in New York on Friday.

According to an official statement, the foreign minister voiced Pakistan's serious concern over the plight of the people in Indian Occupied Kashmir as evidenced in the damning report of the UN Human Rights High Commissioner.

The Foreign Minister also referred to the jingoistic rhetoric from New Delhi, and asked the Secretary-General to urge India not to embark on any misadventure, the statement said. Guterres is due to visit India in the first week of next month.

FM Qureshi expressed Pakistan's desire to engage with India for lasting peace in the region.

On Afghanistan, the Foreign Minister reiterated that peace and stability was only possible through an inclusive, Afghan-led and Afghan-owned peace process.

He said Pakistan's interest was in a peaceful and stable Afghanistan.

The Secretary-General, calling Pakistan a privileged partner of the UN, appreciated its lead role at the UN, including as a top troop contributor to peacekeeping.

Foreign Minister Qureshi and Secretary General agreed on the importance of promoting regional peace through dialogue, the statement said.