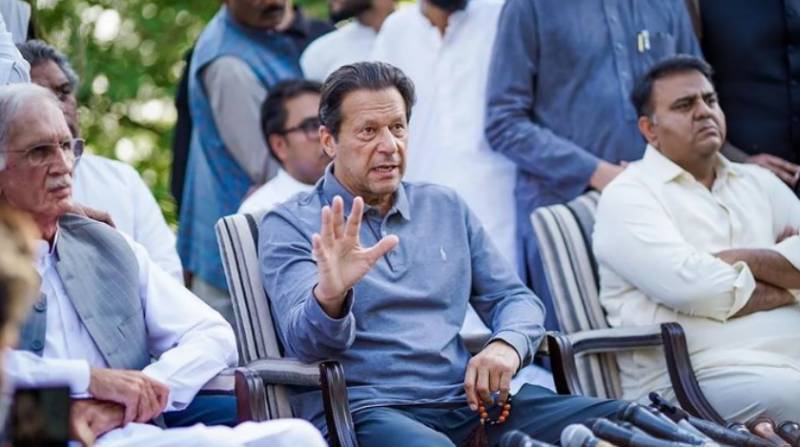 In the nearly identical letters, Khan seeks the president to launch a public inquiry while he urged CJP Bandial to constitute a judicial commission into the matter.

Former PM Imran Khan, who was voted out through a no-confidence motion, had claimed that his government had been threatened by the US and the Opposition was involved in the foreign conspiracy against his government.

He said that Pakistan’s former ambassador to the US was threatened with consequences by a senior official of the Biden administration if no-trust motion was not succeeded.

“You [the President and CJP] have in your possession a copy of the cipher sent by the then ambassador of Pakistan to the USA containing a summary of an official meeting held in the Pakistan Embassy between Mr. Donald Lu, Assistant Secretary of State along with another US official and a note taker and our ambassador along with a note taker and other diplomats of the Mission,” Imran Khan wrote in the letter.

“The Report in the cipher also contains some statements made by Mr. Lu in quotes. The PTI government, as reflected in its last Cabinet meeting, was of the view the contents of the cipher clearly reflect a regime change conspiracy to remove "PM Imran Khan" from the office of Prime Minister.”

He said that conspiracy led to the removal of his government through an “engineered Vote of No Confidence (VNC)” in the National Assembly with the shifting of the allegiance of allied parties to the Opposition and the purchase of loyalties of some members of PTI.

The PTI chairman highlighted that the cipher is also the reason why the Deputy Speaker of the National Assembly disallowed the no-trust vote until such time as the issue of the cipher had been thoroughly investigated.

He urged the President to take action into the matter and “order a public inquiry into this threat to Pakistan's democracy and sovereignty”.

Saying silence from the top court of Pakistan and the Presidency are creating a sense of betrayal and helplessness amongst the people of Pakistan, he said that the truth should be laid before all Pakistanis.

“This is bringing them out to protest against what they see as a violation of their democratic right to vote into power a government for a term of five years through an engineered foreign regime change conspiracy.

The nation looks to Its President to protect the people of Pakistan from such foreign conspiracies. I call upon you to live up to this trust,” Imran Khan concluded.