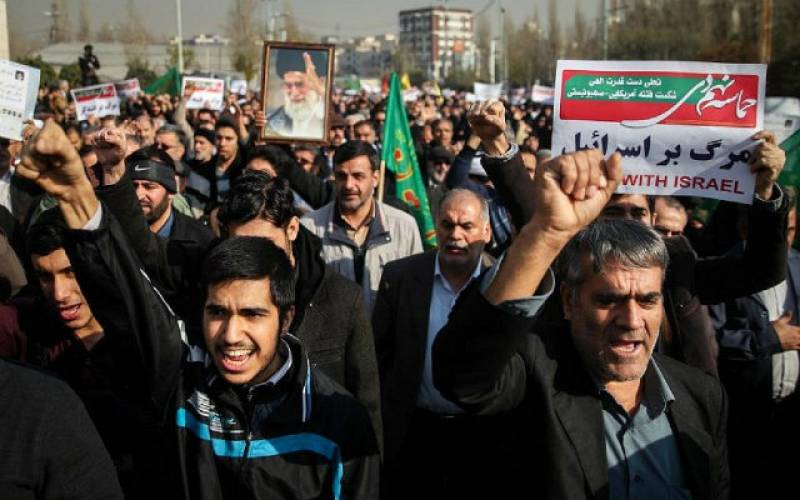 TEHRAN - Thousands of pro-government supporters demonstrated Saturday in Iran after two days of rare anti-government protests over growing economic problems across the country.

Unrest over economic problems has spilled over into fury at the country’s religious leadership – led by Supreme Leader Ayatollah Ali Khamenei. There have also been chants aimed at President Hassan Rohani as fury is vented over rising food prices and inflation.

Nearly 2,000 people gathered peacefully in the capital, Tehran, in support of the government's policies, according to eyewitnesses.

State-run Iranian broadcasters showed demonstrators waving the Iranian flag at the pro-government rally, which had been scheduled before the anti-government protests broke out.

The Iranian government has told people to avoid "illegal gatherings".

"We urge all those who receive these calls to protest not to participate in these illegal gatherings as they will create problems for themselves and other citizens," said Interior Minister Abdolrahman Rahmani Fazli.

TEHRAN - Police in Iranian capital police have announced they will no longer arrest women for failing to observe the ...

Meanwhile, coverage of the anti-government protests was very limited on state-run media, which referenced them only in passing.

The protests - described as the largest public display of discontent since the 2009 Green Movement in Iran - have emerged against a backdrop of rising food and gasoline prices. Some arrests have been reported in Iranian media.

Metro stations and schools have also been closed amid the violence.

At least 53 people are reported to have been arrested over the past two days, with no confirmation of anyone being detained on Saturday.

A video spreading among Persian-language Twitter users on Saturday purports to show students at Tehran University calling for Supreme Leader Ayatollah Ali Khamenei to step down.

Demonstrations in the northeastern city of Mashhad on Thursday prompted protests that spread to cities across the nation on Friday.

In some cities police in riot gear and on motorbikes clashed with demonstrators.

Some protests developed into broader demonstrations against the authorities, calling for the release of political prisoners and an end to police beatings. It was the biggest display of public dissent since huge pro-reform rallies in 2009.

The Iranian authorities are blaming anti-revolutionaries and agents of foreign powers for the outbreak of anti-establishment protest.

The governor-general of Tehran has said that any such gatherings would be firmly dealt with by the police.

In the US, the Trump administration warned Iran overnight that the world was watching its response.

Many reports of peaceful protests by Iranian citizens fed up with regime’s corruption & its squandering of the nation’s wealth to fund terrorism abroad. Iranian govt should respect their people’s rights, including right to express themselves. The world is watching! #IranProtests

A statement posted on the Foreign Ministry website said the Iranian people gave no credence to such "opportunistic" remarks by US President Donald Trump or his administration and described "Mr Trump's government" as the main source of ill will toward Iran.

Relations between Washington and Tehran are currently tense, with the Trump administration critical of what it sees as Iran's growing regional influence and alleged involvement in conflicts including Yemen and Syria.

Rouhani won a landslide re-election in May after campaigning largely on social reform. His campaign also touted the merits of the 2015 nuclear deal with the United States, the European Union and other partners which has been rejected by Trump.

While sanctions against Iran were eased under the 2015 deal in exchange for curbs on Tehran's nuclear program, US sanctions imposed over non-nuclear activities continue to have an impact.