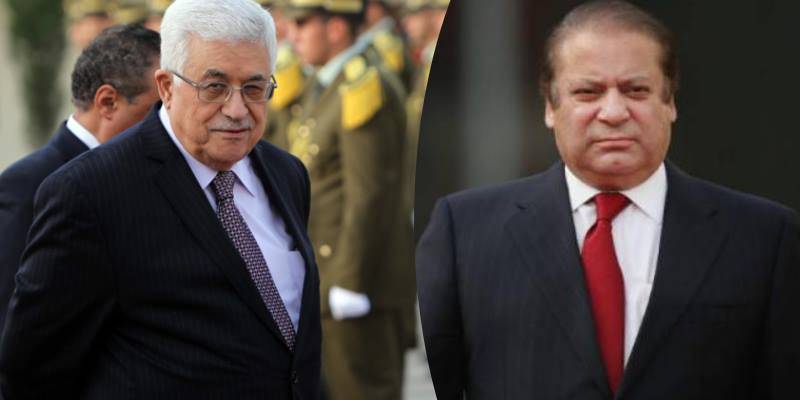 ISLAMABAD - Palestinian president Mahmoud Abbas will arrive in Islamabad today (Monday) where he and prime minister Nawaz Sharif would jointly inaugurate the newly-constructed Palestine Embassy Complex in the Diplomatic Enclave.

The new Palestinian Embassy Complex has been built on a plot gifted in 1992 and later in 2013 while the government also contributed towards its construction.

A spokesman at the Foreign Office said that the honoured guest would be accompanied by a 17-member delegation, five amongst them would be ministers on a three day visit.

This is Mahmoud's third visit to Pakistan and the first visit of a Palestinian president after the recognition of Palestine as a non-member observer state by the United Nations with Pakistan supporting the cause. He visited Pakistan in 2005 and 2013 as well.

The spokesman said in a statement that during the visit President Abbas would have a one-on-one meeting with Prime Minister Nawaz Sharif followed by delegation-level talks.

President Mahmoud Abbas and his delegation will also meet the President Mamnoon Hussain. This will be followed by a state banquet in his honour. Bilateral political matters as well as other issues of common interest will be discussed between the two heads of state.

“The relations between Pakistan and Palestine have traditionally been strong. Pakistan has consistently supported the creation of an independent, viable and contiguous Palestinian state, with pre-1967 borders, with Al-Quds Al-Sharif as its capital. Pakistan has also extended support to the Palestinian struggle for their independent homeland, in all international forums,” added the spokesman.

Earlier, according to the office of Pakistan’s permanent representative at the UN, Dr Maleeha Lodhi, while addressing the UN Security Council, stressed that a just solution of Palestine-Israel dispute would not only usher in enduring peace in the Middle East but also deal a blow to the appeal of extremist organisations like ISIS and al-Qaeda.

“It is clear that the movement of any state’s embassy to Jerusalem will also manifestly violate the Security Council resolutions,” Lodhi said in a debate focusing middle east conflict.