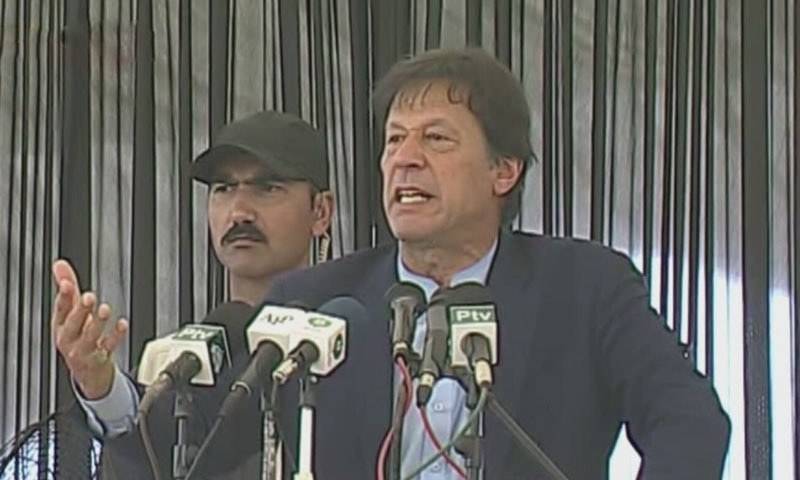 GHOTKI, Sindh - Prime Minister Imran Khan Saturday reiterated his government’s resolve not to forgive the leadership of the Pakistan Muslim League-N and Pakistan Peoples Party unless they pay back the looted public money.

“I challenge you today. Do whatever you want to do, get united or anything else. We will not leave you. This nation will not pardon you. You have only one way out – payback public money, then we will leave you,” the prime minister remarked addressing a public gathering here in the industrial city of Sindh province.

Referring to the train march by the PPP Chairman Bilawal Bhutto, the prime minister said the PTI had staged a sit-in to demand a fair election, not to conceal its corruption.

He said the PPP had to offer Rs 2,000 per head to the people to join their train march because it was not meant for people’s benefit rather cover their own corruption.

The prime minister said whenever the government launched accountability, the opposition started propaganda of threat to democracy. It was not democracy but corruption under threat, he added.

He said in the past, both Sharif and Zardari were labelling each other as corrupt but now they were getting united against the government.

The prime minister told the gathering that during last 10 years Sindh government got Rs 234 billion as gas royalty but the living condition of the people in Ghotki was yet unchanged which produced 70 per cent of gas.

The royalties should be first spent on the areas producing natural resources, he added.

He said the money supposed to be spent on people, went to fake accounts. He said due to corruption, the country’s debt had swelled from Rs 6,000 billion to Rs 30,000 billion within ten years.

Lauding the leadership of Malaysian Prime Minister Mahathir Mohamad, the prime minister said during his 17 years rule, he had surged the per capita income of Malaysia from around $1500 to $9,000. But the corrupt leadership which replaced him put the country again under debt.

Similarly, he said Pakistan once had been the fastest growing nation in Asia and even South Korea had adopted Pakistan’s development model but now it (Pakistan) was under record burden of debt. The country had to pay Rs 6 billion a day as mark-up of the loans.

He said being home to Karachi, the country’s financial capital, most gas reserves and fertile land, Sindh should have been the most developed province.

Contrarily, the interior Sindh was the poorest area in Pakistan, just due to corruption. The prime minister said he had always seen Sindh in deteriorating condition and it was well-known fact as of where the province’s budget had gone.

He assured the gathering of his frequent visits to Sindh to uplift it at par with other areas. He said his government had launched a comprehensive poverty alleviation program benefiting from Chinese experiences. Insaf Sehat Cards proving health insurance cover of Rs 720,000 per family were being distributed. The programs for women empowerment, interest-free loans and youth employment were also coming up, he added.

The prime minister also committed to ending the practice of using police to victimize the political opponents in Sindh.

Addressing the gathering, Foreign Minister Shah Mahmood Qureshi said the parties which had been a symbol of the federation in the past were now missing from Punjab, Khyber Pakhtunkhwa, Balochistan and Karachi.

He said only PTI and MQM were representing Karachi, not the PPP that had now been shrunk to interior Sindh.

He said PPP had been ruling Sindh from 2008 to 2018 but the living standard of the people remained unchanged which required a second thought by the people to find a new course.

He said he had decided to join the PTI just to make Naya Pakistan. Starting from KP, the PTI had made its way to Punjab by ending the 30-year rule of the PML-N, putting all notions of analysts to rest.

He said the PTI had also defeated the PPP in its strongholds including Badin and Larkana.  Addressing the leadership of GDA, he said it was time to make decisions and form joint strategies as he foresaw a great political change in Sindh in next elections owing to PPP’s failure to deliver. He hoped that the PTI and its allies would form the new government in Sindh.