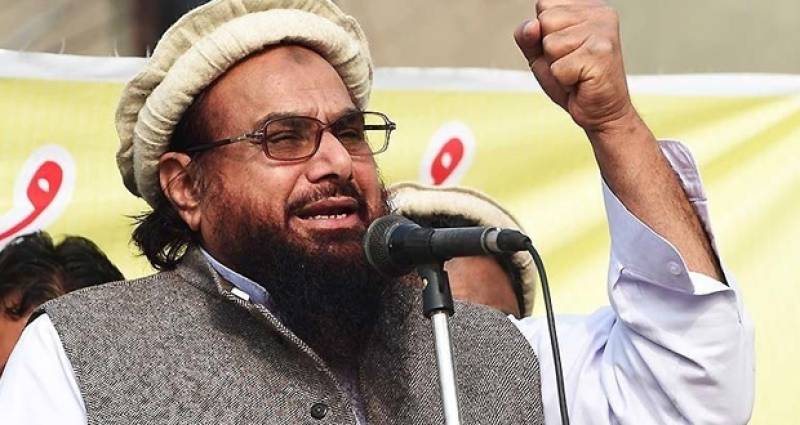 LAHORE - Hfiz Saeed, the chief of banned organisation, Jamaatud Dawa (JuD), has sent a legal notice to Foreign Minister Khawaja Asif for his controversial statement against his party in United State (US) last week.

The notice, served by Advocate AK Dogar under Section 8 of the Defamation Ordinance of 2002, claims that emir JuD is "respected as a deeply religious and devout Muslim".

On September 27, Khawaja Asif had said that Pakistan should not be blamed for Haqqani Network, Hafiz Saeed and other militant outfits, in fact, they were ‘blue eyed’ of the US a few years ago.

Speaking at Asia Society seminar in New York, Pakistan's foreign minister said these people had been invited in the ‘White House.’ He said, "Don’t blame us for the Haqqanis and don’t blame us for the JuD chief. These are the people who were your darlings just 20 to 30 years back", Khawja had told the participants.

Asif said, “It is very easy to say Pakistan is floating the Haqqanis and Hafiz Saeed and Lashkar-e-Taiba. They are liabilities. I accept that they are liabilities, but give us time to get rid of them because we don’t have the assets to match these liabilities and you are increasing them further.”

On January 22, 2015, In a significant move towards the execution of the National Action Plan against terrorism, the interior ministry has included the Jamaatud Dawa (JuD) and the Haqqani network in the list of proscribed outfits, it has been learnt.

Saeed had been accused by the United States and India of masterminding the 2008 attacks on the Indian financial capital Mumbai that killed 166 people.

He, however, has repeatedly denied involvement in the 2008 Mumbai attacks.