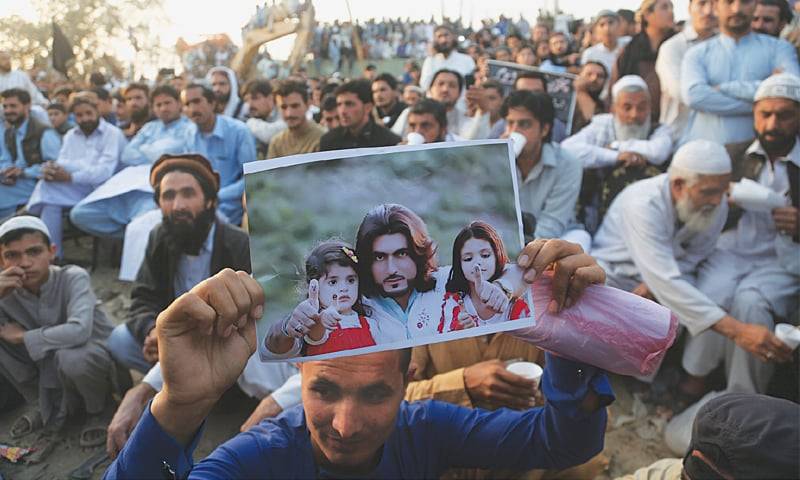 KARACHI - A shocking video of a Pakistan Muslim League-Nawaz (PML-N) lawmaker 'groping' a minor girl emerged on Wednesday, as members of the Mehsud tribe ended their jirga held in Karachi to protest the 'fake police encounter' of Naqeeb Mehsud.

The video shows Nisar Muhammad Khan, a PML-N senator from Khyber Pakhtunkhwa and a member of Senate Standing Committee on Human Rights, touching the child in a very disturbing manner while the onlookers watch in silence.

The video was filmed while he was speaking to protesters gathered in Sohrab Goth area to protest the alleged extrajudicial killing of Naqeebullah Mehsud.

The senator had been at the gathering as part of a Senate delegation - which was led by Senator Nasreen Jalil and comprised senators Farhatullah Baber and Shahi Syed, among others.

The innocent girl looks terrified as the man touches her face while beginning his address to the Jirga, which was assembled to condemn Mehsud’s extra judicial killing.

A police party led by ex-Malir SSP Rao Anwar had fatally shot Naqeebullah Mehsud, 27, during a raid on what they described as a "terrorist hideout" near Shah Latif Town on January 13. He was buried in his native town of Makin, in the South Waziristan tribal district bordering Afghanistan.

KARACHI - Days after a young man along with four others was killed in encounters with Karachi police in the port city, ...

Social media users reacted to the senator’s improper actions with abusive remarks, with many viewers tying it to recent cases of child abuse which have shaken the nation.

They also questioned the child’s parents regarding why they let Nisar Khan hold her like that.

The shocking scenes emerge weeks after the brutal kidnapping and killing of seven-year-old Zainab in Punjab which shocked the world.

Zainab Ansari was found raped and strangled on a rubbish pile about a mile from her home in Kasur district. Her parents were away on pilgrimage in Saudi Arabia, and the girl and her two sisters and brother were watched over by her aunts and uncles who all live in the same house.