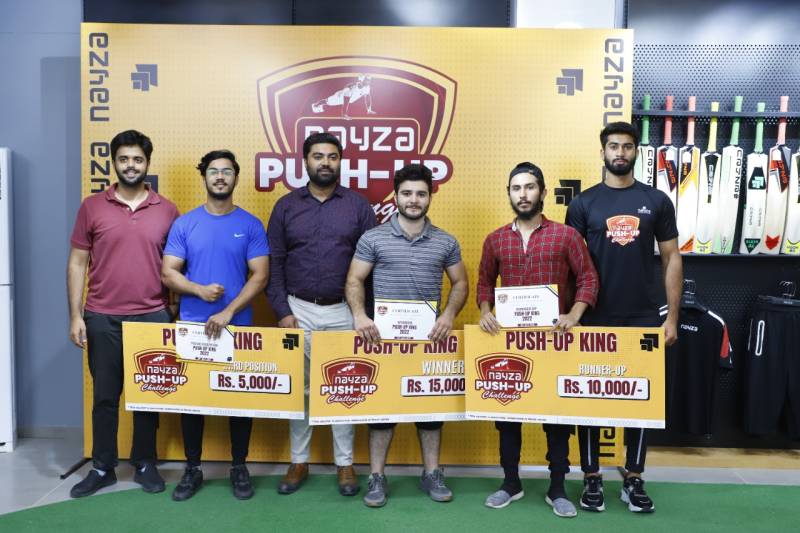 Muhammad Hamza won the 1st Nayza Push-up Challenge that held here at Johar Town on Saturday, where several participants exhibited their prowess during the healthy activity.

The participants registered themselves through the qualifiers round held at Nayza stores from July 26 to 29. To qualify for the finale, they had to complete 40 push-ups in 2 minutes. After a tough competition, Muhammad Hamza, who came from Rawalpindi to take part in the event, clinched the first position with 88 push-ups in one minute and earned the title of ‘Push-Up King’. Saqib Khan finished as runner-up with 79 push-ups while Abdullah Rana came third with 75 push-ups.

The winner of the event earned a prize money of Rs 15,000 while the runner-up received Rs. 10,000 and Rs. 5,000 to third position holder. A special prize was also handed over to participant Zain Sheikh for showing the great sportsman spirit.

Muhammad Hamza, while talking to media, said that he came all the way from Rawalpindi to feature in this healthy event. “I practiced very hard for the finale and I was confident enough to deliver. Thanks to Almighty, I succeeded in giving my best and emerged as winner with 88 push-ups in a minute.”

The runner-up (Saqib) and third position holder (Abdullah) also expressed their gratitude to the activewear brand for organizing this grand and healthy event for the players from across the country.