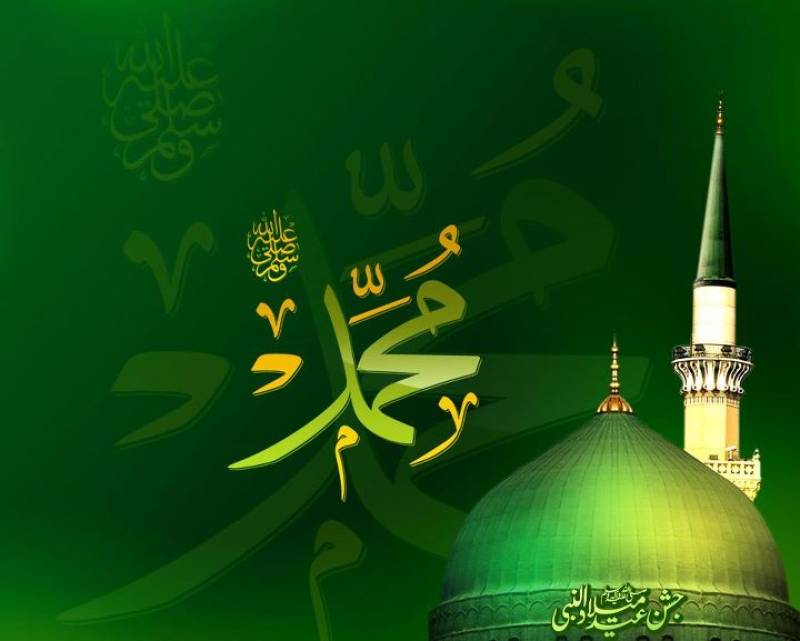 LAHORE - Eid Milad-un-Nabi, the birthday of Holy Prophet (Peace Be Upon Him) is being observed across the country with traditional religious zeal today (Friday).

The government has announced a public holiday on Friday.

Special Conferences, events, and Mehafil-e-Naat have been arranged to pay respect to the last messenger whose whole life and teachings are beacons of light for the whole mankind.

Ministry of Religious Affairs has organized a National Seerat Conference on Saturday in Islamabad in connection with Eid Milad. President Mamnoon Hussain would be the chief guest at the moot which would be attended by a number of delegates from home and abroad.

The government and religious organizations, Milad committees and individuals have planned a number of activities including Milad processions, seminars, conferences, and discussion programmes to celebrate the annual event.

The sacred day will begin with offering special prayers in mosques for upholding and flourishing of Islam and religious teachings, unity, solidarity, progress, and welfare of the Muslim ummah.

Numerous Eid Milad-un-Nabi processions will be taken out across the country and ‘Mehfil-e-Milad’ would be held to celebrate the occasion.

All city streets and roads including bazaars and shopping centers, government and private buildings have been beautifully decorated with lights and banners bearing the writings about the celebration of the Eid Milad-un-Nabi (PBUH) have been illuminated across the country.

Gates have been erected at all major roads and streets in all small and major towns of the country in connection with Eid Milad-un-Nabi (PBUH) celebrations.

Private and public buildings have beautifully been illuminated with colorful lights on this occasion to express jubilation over the sacred day.

Many vendors have set up colorful stalls with a unique collection of badges, stickers, flags, and banners inscribed with religious slogans, to pay respect and reverence to the Holy Prophet (PBUH) across the country.

Federal and provincial governments have already prepared contingency security plans with coordination of other law enforcement agencies to guard the processions and other events to be held on the day.

Special checking of the route in Islamabad would be completed before the procession starts and bomb disposal squad would clear the route on the day.

More than 2,000 police personnel, including 300 traffic policemen, will perform security duties on Eid Milad-un-Nabi in the federal capital, while special teams of Rangers, crime investigation department (CID), and special branch police will assist in the smooth performance of their duties.

The main procession in Islamabad will start from Sector G-7 (Sitara Market) and culminate near the shrine of Hazrat Sakhi Mehmud at Aabpara Market. The areas will be completely cordoned off through heavy deployment of law enforcement personnel.

Strict monitoring of the main procession, through Close Circuit Television (CCTV) cameras recently installed, is part of the security plan. Parking vehicles on the route of the procession will be prohibited.

Police patrolling had also been enhanced in many areas.

The faithful would be checked with metal detectors and walk through gates would be installed at the entry points of the processions.

The route of the main procession would be sealed completely and streets on the route would also be barricaded.

In Rawalpindi, as many as 3,500 policemen will be deployed in Rawalpindi district to ensure security for the processions of Eid Milad-un-Nabi (PBUH).

All the traffic would be diverted on other routes.

Eid Milad-un-Nabi (PBUH) celebrations have begun in Karachi with religious zeal and fervour, while authorities have finalised a comprehensive security plan on the occasion.

More than 23,000 police personnel will be deployed across the megapolis, while 5,000 personnel will perform security duties along the route of the main procession in the city.

A procession, organised by Dawat-e-Islami, will be taken out from Kharadar area to Garden, while another procession, led by Maulana Akbar Dars, will march from Memon Masjid Kharadar to Aram Bagh.

Shah Abdul Haq Qadri will lead a procession from Kharadar to Nishter Park.

Police officials and personnel will perform security duties along different routes. Members of bomb disposal squad (BDS) will sweep the routes, while snipers will be positioned on high-rise buildings all along.