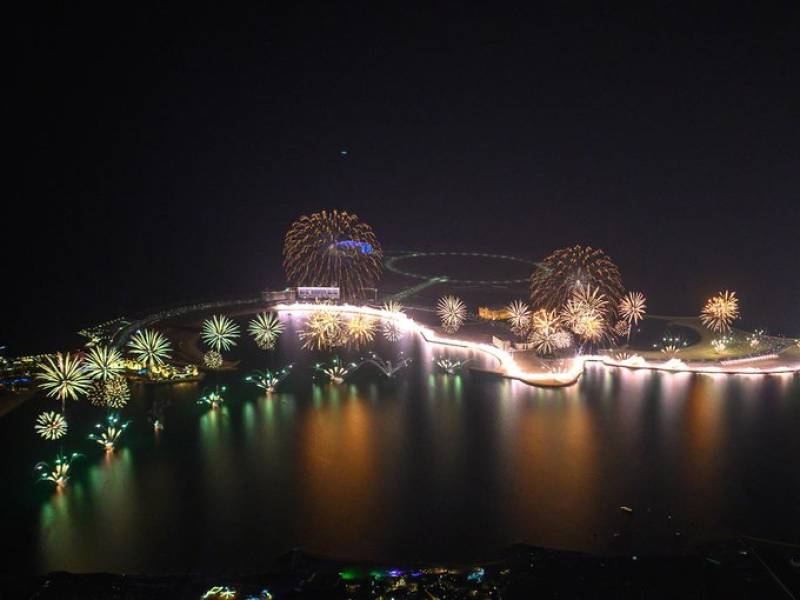 Setting the first Guinness World Records title for the ‘Highest Altitude Multirotor/Drone Fireworks Display’ was the tower of fireworks 1,055.8 metres high, taller than any skyscraper in the world. Using state-of-the-art drone technology, the specially designed fireworks was breathtaking in its scope and scale, UAE’s official news agency WAM reported.

It also set the record of the ‘Most Remote Operated Multirotors/Drones Launching Fireworks Simultaneously’, when 452 drones launched fireworks simultaneously to create the ‘Happy New Year’ visual in the sky. For the feat, the organisers leveraged advanced pyrotechnics and integrated wireless technology, lighting up the shores of the emirate in majestic brilliance.

The 12-minute spectacle was specially choreographed to reflect the joy of reunion with six themes set to epic orchestral music. The symphony of lights and music provided the visitors, several of whom had been camping at designated spots with family and friends from the day before, one of the most enriching festive experiences.

The grand finale was in two parts – one a multi-colour display of lights followed by a super-massive expanse of white that illuminated the skyline of Ras Al Khaimah with the message of hope and ambition.

A spokesperson of the organising committee said, "RAKNYE2022 is our tribute to the leadership and people of Ras Al Khaimah and the UAE not only as we celebrate the 50th Anniversary of our nation but also in preparation for the Next 50 Years. Delivering the message of hope, positivity, resilience and confidence, the fireworks display, and the New Year’s Eve festivities brought together people again to celebrate safely. With this event, we once again underlined the reputation of Ras Al Khaimah as the leading tourism destination that welcomes visitors from across the world."

New Zealand and Australia have welcomed in the New Year, 2022, with an impressive light show and fireworks display ...