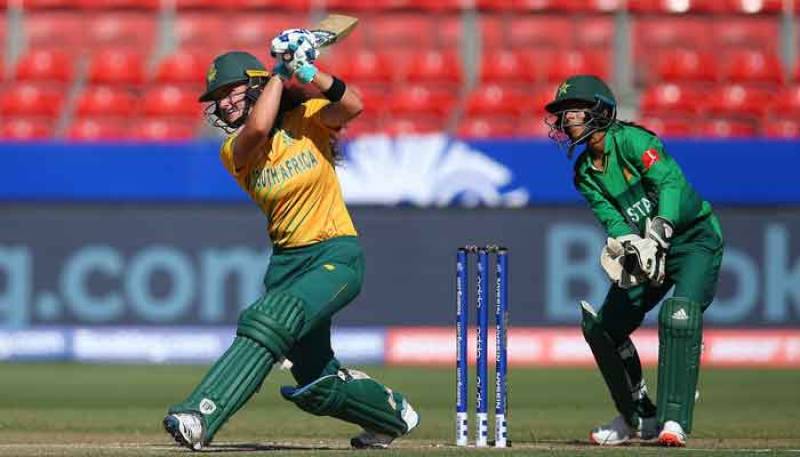 In the Group-B fixture played at Sydney Showground Stadium on Sunday, Pakistan managed 119 for five in their pursuit of the 137-run target.

In-form Aliya Riaz was the top-scorer in the Pakistan innings with an unbeaten 32-ball 39. The all-rounder struck three fours and a six.

Captain Javeria Khan, playing her 100th T20I, made 31 off 34, hitting four fours, and helped her side stage a recovery after an early collapse which saw Pakistan lose three wickets for eight runs as the scorecard read 26 for three inside seven overs.

Pakistan seemed to gain momentum, but Javeria’s run-out in the 11th over at the non-striker’s end swung the match in South Africa’s favour. Aliya struck the ball down the ground and as Chloe Tryon, the bowler, went down in her follow-through to the field, it rolled onto the stumps after deflecting off her fingers.

Earlier, Laura Wolvaardt scored an unbeaten 53 from 36 balls after South Africa opted to bat. The right-hand batter struck eight fours and was instrumental in helping her side set up a competitive score.

Diana Baig struck early and had South Africa one down for four runs with the wicket of Lizelle Lee (four) on the fourth ball of the match. The medium-fast bowler struck again as Lee’s opening partner Dane Van Niekerk (three) was also back in the pavilion as Diana bowled her in the fifth over.

Marizanne Kapp, batting at three, denied any further inroads and pushed back the Pakistan bowlers with her 32-ball 31, which included two fours and a six.

Diana returned two for 19 in four overs, while all other four bowlers – Anam Amin, Aiman Anwer, Syeda Aroob Shah and Nida Dar – picked up a wicket each.

In their last group fixture, Pakistan plays Thailand Women at the same venue on Tuesday, 3 March.