CPEC to bring employment and peace in region: PM Nawaz 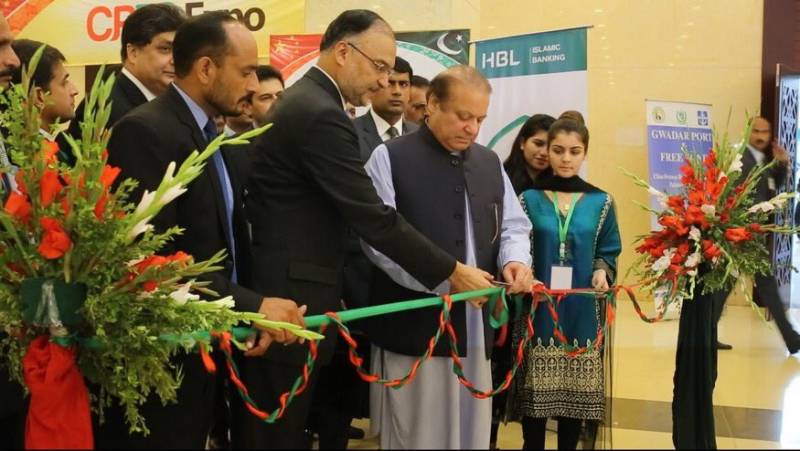 The two-day CPEC Forum and Fair was successfully held in Islamabad at Pakistan Friendship Centre . Federal Minister of Planning and Development Ahsan Iqbal chaired the meeting.

The Summit held here at the Pakistan China Friendship Centre was hosted by Ministry of Planning, Development and Reform and marks the inking of historic $46bn CPEC project. It was inaugurated earlier in the day by the prime minister.

The summit and expo, which aim to enhance awareness about the ambitious project, will give the people of Pakistan and the world information and understanding about CPEC, the PM said.

The prime minister termed it a “new concept in diplomacy” and said it would help in elimination of poverty and unemployment.

Sharif said the project would erve as a “game-changer” not only for Pakistan, but also for the entire region by helping to reduce deprivation and bring peace and prosperity.

“CPEC is not only a strategic agreement between China and Pakistan, but it is also a precious testimony of friendship between the two countries for decades.”

Nawaz Sharif further said that the economic corridor will take strategic cooperation between the two countries to a new level. “CPEC itself will occupy a place in global affairs.”

The premier said CPEC was not merely a strategic agreement, but rather a culmination of a decade-long friendship between Pakistan and China. He said it was an advanced stage of relationship in the history of cooperation and collaboration between the two countries on issues of global importance.

The two sides never left each other in times of distress, Nawaz Sharif said while recalling Chinese assistance to Pakistan following the devastating earthquake in 2005 and floods in 2010.

He said during his visit to Pakistan, President Xi Jinping told the parliament that Pakistan stood by China when it was isolated. He said that it was time for China to return the favour when Pakistan stood economically isolated.

He termed CPEC as the most important initiative of 21st century and said it perfectly complements Pakistan's vision 2025.

Sharif said Pakistan was an emerging economy which was rich in natural resources. He mentioned that Pakistan was currently enjoying the highest GDP in the past eight years, with best performing stock market, doubling of the foreign exchange reserves and improvement of security environment.

He said the economic value of the project was $46 billion dollars, but the real impact was many times more and would have a longer lasting effect.

He said the project would not only improve Pakistan's own infrastructure but would also provide it the much needed knowhow, knowledge and expertise in new technologies. “$35b would be invested in energy sectors alone to produce 10400MW of electricity.”

"The project will benefit all regions of Pakistan equally including Gilgit Baltistan and remote areas of Khyber Pakhtunkhwa and Balochistan," said the PM.

He described development of Gwadar as the “jewel project” of the entire CPEC, with its own power generation, road, rail and air links and said it would serve as a "model smart port city".