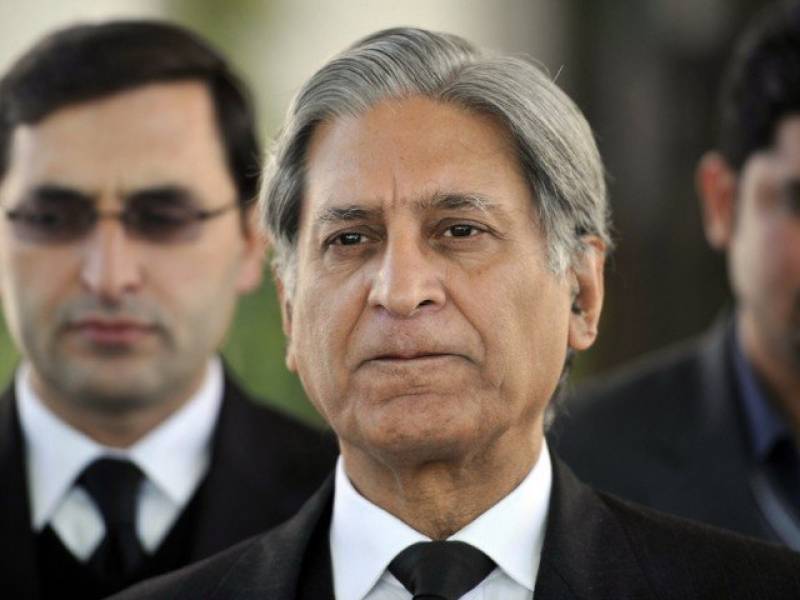 ISLAMABAD - Leader of opposition in Senate Aitzaz Ahsan stated on Thursday that prime minister Nawaz Sharif would make Nehal Hashmi governor of Sindh after two years for his sacrifice.

Aitzaz was expressing his views in the backdrop of the controversial speech made by the PML-N Sindh stalwart in which he threatened the investigators currently probing offshore assets of the ruling Sharif family.

The senior lawyer said that the government was conspiring to make the Supreme Court and joint investigation team controversial, adding that the story published in 'The News' regarding a WhatsApp call by the apex court’s registrar was false and fabricated.

"The chief justice should form a full court bench to investigate the news story and unearth the truth," demanded Aitzaz Ahsan and cited Nehal Hashmi's outrageous speech as something to support the story.

Ahsan alleged that Hashmi’s statement was issued with consent from premier Nawaz Sharif who would not have let him [Hashmi] resign if the former had not stepped out of line.

Pakistan Muslim League (Nawaz) leader Nehal Hashmi came into the limelight on Wednesday when a video surfaced in which he can be seen threatening the judiciary in a veiled reference.

Hashmi’s party membership was revoked on Wednesday after the prime minister house took a notice of his speech.

The Supreme Court of Pakistan served contempt of court notice to Senator Nehal Hashmi on Thursday for his threatening speech that went viral on the internet a day earlier.

The senator who appeared before the three-member bench on Thursday was reprimanded for his comments that stirred controversy among the power corridors. The apex court sought Hashmi’s reply regarding the contempt of court notice by Monday besides appointing Attorney General Ashtar Ausaf as a prosecutor.

The ruling PML-N apparently developed some tension with the top judiciary on Thursday after a Supreme Court judge compared the ruling elite with the notorious Sicilian mafia of Italy.

The SC bench, headed by Justice Ejaz Afzal Khan, which had a particularly fiery exchange with the attorney general (AG) on Thursday, came down hard on Hashmi over his controversial remarks, saying only mafias and terrorists threaten children.

The judges asked the Attorney General (AG) whether he was aware of what was going on. “It seems that the government’s self-proclaimed spokespersons let no opportunity for maligning the courts slip by,” Justice Ejaz Afzal remarked.

“It is not our custom to bring our children into our fights,” Justice Sheikh Azmat chimed in, referring to the senator’s threats. “Mr Attorney General, what kind of people involve children in their fights,” he asked.

“No, not cowards – it is terrorists and the mafia who do such things,” responded Justice Azmat.

“Congratulations Mr Attorney General: it seems that your government has joined the Sicilian Mafia,” he added.

After the comments reverberated across the television channels, govt's spokesperson termed these remarks "deplorable" and “against the traditions, oath and moral conduct” of the apex court.

“The judges’ remarks hurt the identity and image of Pakistan in the world,” the spokesperson said in a statement, adding that an SC judge “ignored the PM’s action against Nehal Hashmi” over his inflammatory speech against the Panama Joint Investigation Team members.