FATA's mainstreaming to be completed during NA's term: PM Abbasi 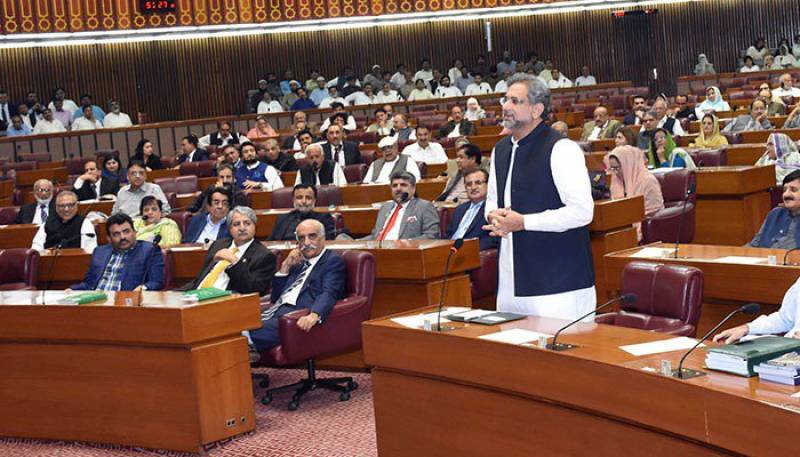 ISLAMABAD - Prime Minister Shahid Khaqan Abbasi says the process of mainstreaming FATA will be completed by the end of the current term of the National Assembly.

Speaking in the National Assembly on Wednesday evening, he said consultations will be made with representatives of the parliamentary parties to this effect.

Giving details of some decisions for the objective, the prime minister said Agency Development Fund (ADF) has been abolished from today.

He said local bodies elections in FATA will be held by October this year. Similarly, he said timeframe for elections of provincial and National Assembly seats will be decided after consultation with all political parties.

Praising efforts of law enforcement agencies, PM stated that military personnel had tendered unrivalled sacrifices to restore peace in the troubled border region. Abbasi stated that he had visited FATA on Monday to find out only that peace situation had improved drastically.

“LG polls in FATA will be conducted before October-2018 whereas all parliamentary leaders will be taken into confidence in this regard. Parliament will play its role as per desires of masses of FATA,” vowed Abbasi.

PM Abbasi said the government is committed to provide Rs 1000 billion in 10 years as envisaged in the FATA reforms report in addition to the funds being provided to the tribal areas. The government will take every step for equalization of FATA with other parts of the country, he added.

Earlier, the National Assembly opened debate on Wednesday on the federal budget for the next fiscal year.

The leader of the Opposition Syed Khursheed Shah opening the discussion said the country is facing huge problems due to rising population and declining natural resources.

He said proper policies have not been devised to overcome the problems being faced by the populace. Criticizing the appointment of Finance Minister, he said his party rejects the budget as unconstitutional.

Opposition Leader said the government took huge loans and put the additional burden on the masses of the country. Syed Khursheed Shah said parliament is a supreme institution and its sanctity should be upheld by all. He said it is need of the hour that all politicians make unanimous decisions on issues of national importance.

He said the government has to pay 14 percent interest on circular debt each year which could not be managed over the course of last five years. The Parliament said the budget deficit is widening, in 2013, debt to GDP ratio was 60 percent which is now close to 70 percent and above the legal ratio allowed by the parliament through legislation, he added.

Khursheed Shah said government claimed to give Rs 184 billion relief to the people but on the other hand, it put a burden of four hundred billion rupees in petroleum levy and other taxes.

The House unanimously passed a resolution against abusive language used by some ministers for PTI women.

Speaking on the issue, MNA Shireen Mazari of Pakistan Tehreek-i-Insaaf (PTI) said remarks by some politicians against PTI women are deplorable and such things do not suit opinion leaders.

Shazia Murree of PPP said the problem is of mindset. The women are being under-estimated. She condemned the remarks against women.

MNA Tahira Aurangzeb of PML-N said Islam gives high value to respect and dignity of women. She said Chief Minister Punjab apologized for remarks made by a provincial minister.

Ayesha Syed of Jamat-e-Islami said the stature of women is high in our society and we should avoid targeting them in our political statements.

Shahida Akhtar of JUI-F said a woman is respectable in every role and her degradation should be condemned.

The House will now meet on Thursday at 10:30 in the morning.