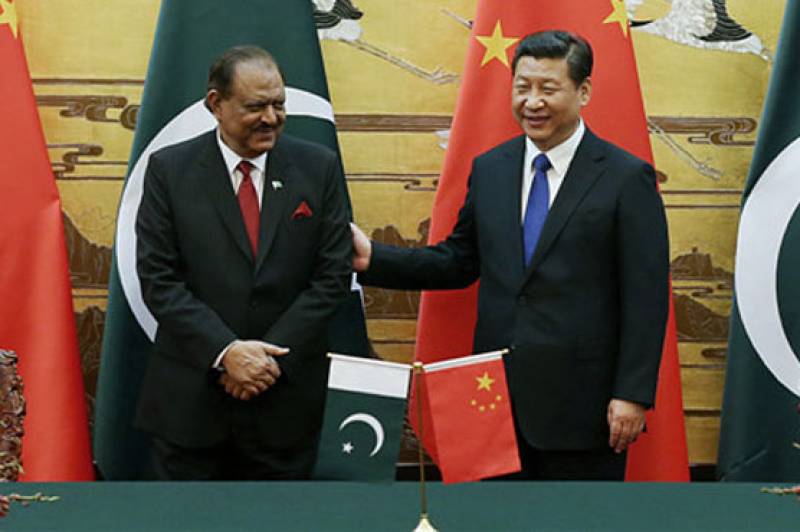 BEIJING (APP) - President Mamnoon Hussain Wednesday said Pakistan and China would remain "eternal and irreplaceable" friends as their friendship was playing a pivotal role in pursuing the common objectives of peace and development in the region.

He said Pakistan, being located at the southern end of the Silk Road Economic Belt, had a geographical and political relevance with this vision.

He said China Pakistan Economic Corridor (CPEC) will not only prove helpful in regional connectivity and prosperity, but also promote development in the region.

Mamnoon urged the Chinese companies to explore the Pakistani markets and invest in mutually beneficial and profitable areas including manufacturing, energy, infrastructure, textiles and agriculture sectors.

The President said he was visiting China to attend the 70th anniversary of the culmination of World War II and stressed upon international community to draw lessons from history and explore effective approaches to safeguard international peace and security.

He mentioned that Pakistani forces had struck major blows to terrorists through the Operation Zarb-e-Azb, which he said would continue till the elimination of terrorism from the Pakistani soil.

The President emphasized on further expanding exchanges between think-tanks, media, youth, academics and artists of the two countries to make the friendship more deep-rooted at public level.

Later, a colourful cultural programme was presented with a variety of traditional music and dances.

The China-Pakistan Friendship Association was founded in 1956 with an aim to promote economic and cultural links, and cooperate in fields of science, education and trade between the two countries.