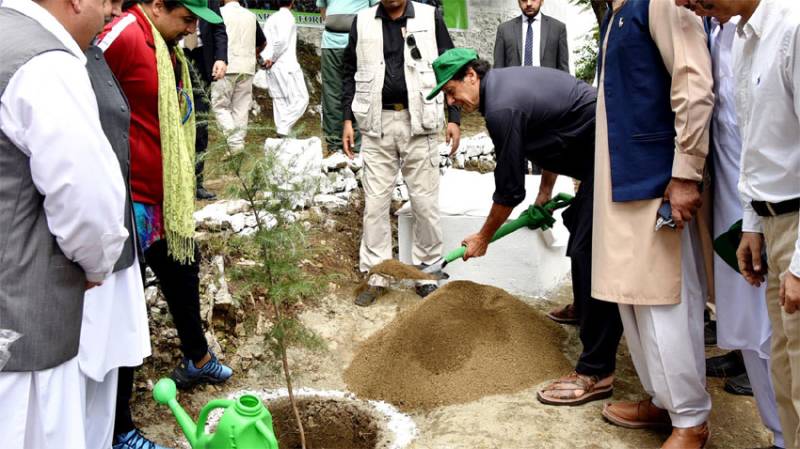 Talking to media after formal inauguration of the campaign, he said tree plantation is imperative for Pakistan to meet challenges of global warming.

PM Imran Khan planting a sapling in Haripur today and once again uniting the entire country behind a cause that has already gotten us so much global recognition. Kaptaan always knows the people of Pakistan come through as his team and never disappoint him. #Plant4Pakistan pic.twitter.com/pXNsBnlbus

Imran Khan said Pakistan is one of the seven most affected countries by global warming and prime objective of this drive is to make the country green and counter the negative impact of global warming. He said about 200 points have been established across Pakistan for the provision of tree saplings during the first phase of the drive which is being launched in 18 major cities of the country.

The prime minister said the campaign will continue till plantation of 10 billion trees across the country in five years.

He said pollution is also a big challenge for us and trees also clean the air and provide oxygen and absorbs the carbon dioxide. The government plans to include plantation and cleanliness in the school curriculum. Meanwhile, in a tweet message today, Prime Minister has urged the nation to participate the green Pakistan drive to make Pakistan a green country, he added.

PM IK & @aminattock in best possible mode;working and active. They kickstarted the 10 billion tree tsunami today in Haripur. The efforts were replicated across the country by civil society,govt reps and teams. Here’s to dreaming the big dream for a #GreenPakistan #Plant4Pakistan pic.twitter.com/x7ePyFYlMx

PM Khan said we launched our tree plantation drive "Plant for Pakistan" across the country and the nation should join this drive so we can counter twin threats of climate change and pollution confronting our future generations.

1.5 million trees are being planted under "Plant for Pakistan" campaign in major cities all over the country today.

Prime Minister Imran Khan has urged the nation to participate the green Pakistan drive to make Pakistani a green country.

Today we launch our tree plantation drive #Plant4Pakistan across the entire country. I want everyone to join this #GreenPakistan drive so we can counter the twin threats of climate change and pollution confronting our future generations.

In a tweet message today, he said we launch our tree plantation drive "Plant for Pakistan across the country and the nation should join this drive so we can counter the twin threats of climate change and pollution confronting our future generations.

Drone Footage day 1 #Plant4Pakistan drive at Mohmand District. Total 100,000 plants target in the next 3 days by engaging students/youth & community. This is the largest plantation drive ever held in Mohmand District in a span of 3 days.#climatechange #KPKUpdates #GreenPakistan pic.twitter.com/CRNdhjPy5f

Governor Sindh @ImranIsmailPTI planted a shrub in the Governor House for the #Plant4Pakistan campaign. pic.twitter.com/NbI30EkMSB

Celebrity Ambassador for 10 billion tree plantation, Ali Zafar has something to say to you and then he’s off to plant a tree. Have you planted your tree yet? 🌳🇵🇰! @AliZafarsays @aminattock #GreenPakistan #Plant4Pakistan pic.twitter.com/OLTzLKPkZJ

Sanam Saeed in her exclusive message urged everyone to become part of the #Plant4Pakistan🌲initiative launched by Prime Minister @ImranKhanPTI. @sanammodysaeed #GreenPakistan 🇵🇰 pic.twitter.com/rkVaEpetOj