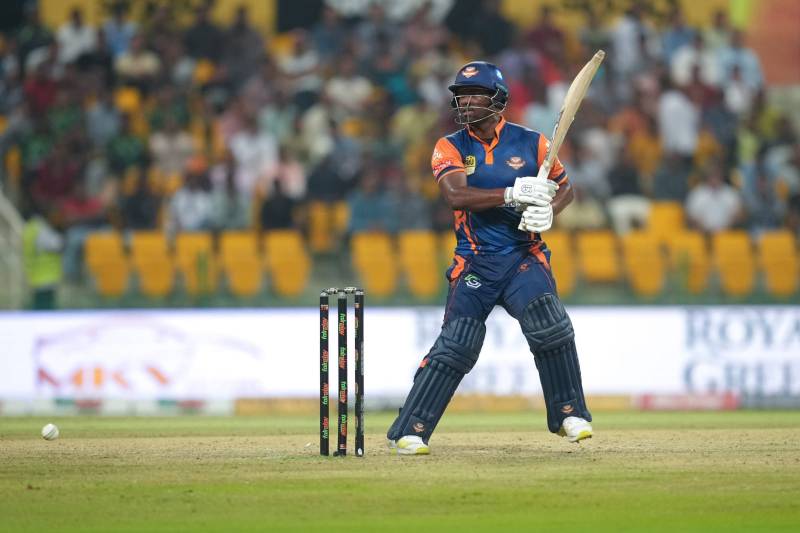 Morrisville Samp Army marched into the play-off stage through a well-fought 19-runs win over Deccan Gladiators in the 25th match on the ninth day of the Abu Dhabi T10 at the Abu Dhabi Zayed Cricket Stadium on Thursday.

Samp Army posted 126 for 2 in 10 overs through opener Johnson Charles’ unbeaten 58 and David Miller’s unbeaten 35. Chasing the target, Deccan Gladiators could muster only 107 for 5 in 10 overs. Tom Kohler-Cadmore’s unbeaten knock of 41 runs went in vain.

Little ended Janat’s knock by having him caught by Andre Russell at long-on for 21. Skipper Moeen Ali joined Charles. The first ball of the fourth over was brilliantly hit by Charles for a six over long-on. Charles continued to score even when David Wiese was introduced. He hit Wiese’s first delivery over extra cover for a boundary. Moeen Ali too picked his first boundary by bottom edging to the third man region. At the half way mark, Samp Army were 51 for 1.

Charles further accelerated the run flow by hitting Zahoor Khan for two consecutive boundaries off the first two deliveries. Odean Smith ended Moeen Ali’s stay at the wicket through a brilliant catch taken by Russell at long-off for 10. Charles hit Smith’s third ball of the seventh over for a six to deep square leg.

He then scooped Zahoor Khan’s second and third deliveries for boundaries. The ninth over was bowled by Hasnain, and David Miller hit the third delivery for a six to mid-wicket. He also picked a boundary off the next to square leg. Charles ended that over hitting Hasnain over long on for a six and reaching his half century in 27 balls.

The last over saw Miller in his killer form. He hit the first ball from Russell for a boundary and the next two went for sixes. The first six was over extra cover and next one over mid-wicket. Charles ended the over by scooping Russell for a boundary and remaining unbeaten on 58 off 28 balls with seven boundaries and three sixes. Miller remained unconquered on 35 off 13 balls with two boundaries and three sixes. Samp Army thus posted an impressive 126 for 2 in 10 overs.

Deccan Gladiator’s aggressive and consistent scorers Tom Kohler-Cadmore and Nicholas Pooran began their chase. Pooran picked a  boundary to fine leg off Sheldon Cottrell’s second delivery but fell to his fourth ball. Going for a mighty hit, Pooran thicked edged Cottrell to substitute George Garton at third man. Andre Russell hit the first ball he faced from Cottrell to backward point for a boundary. Will Smeed picked two boundaries off Janat in the same over.

The first ball of the second over from Karim Janat saw Russell get run out to a throw from Dwaine Pretorius at fine leg for 4.  Ahmed Raza bowled a tight third over giving away just eight runs. The fourth from Anrich Nortje too was impressive, he too gave away only eight runs.

Pretorius was introduced for the fifth over and he removed Smeed, driving to Nortje at the fence. Odean Smith joined Kohler-Cadmore and upper-cut Nortje for a six to third man. Still 69 runs were needed off the last 24 balls.

Smith hit Chamika Karunaratne for a six in the seventh over and that made 53 runs needed off the last three overs. Kohler-Cadmore hit Pretorius, who bowled the eighth  over, for a six. Since that delivery was a very high one, Cadmore got seven runs including the no ball. The fourth delivery was hit for a six by Smith.

With 34 runs needed off the last 12 balls, Cottrell struck to have Odean Smith brilliantly caught by substitute Garton again at wide long on. His knock of 27 came off 12 balls with three sixes. He had put on 53 runs with Kohler-Cadmore for the fourth wicket.

Deccan Gladiators still needed 31 off the last six balls. Janat bowled a tight last over giving away just 11 runs despite being hit by Kohler-Cadmore for a six to mid-wicket. He also picked the wicket of Wiese for 2 and Samp Army recorded a 19 runs win. Kohler-Cadmore remained unbeaten on 41 off 26 balls with two boundaries and two sixes.

Player of the Match: Johnson Charles

When I got to know I will play for MI Emirates and Kieron Pollard as captain, my happiness doubled: Muhammad Waseem