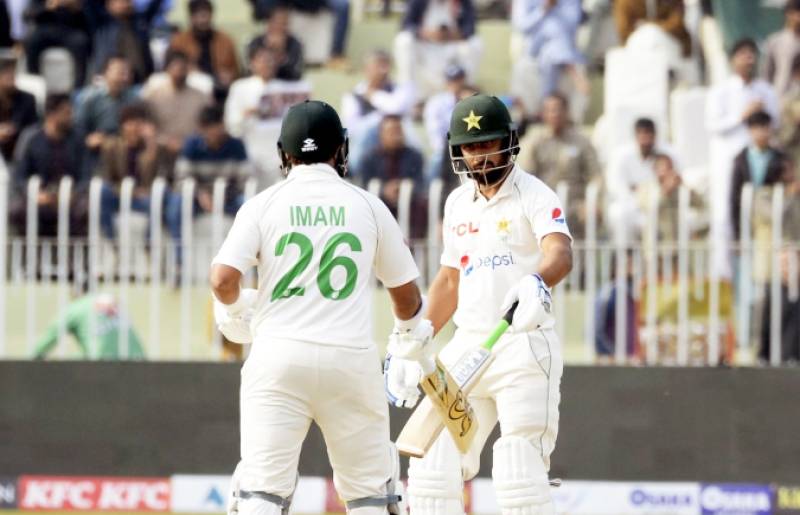 RAWALPINDI – England gained a good lead after taking wickets despite centuries by Abdullah Shafique, Imam-ul-Haq and Babar Azam on the third day of the opening Test in Rawalpindi on Saturday.

Pakistan were 499-7 at stumps with Agha Salman (10) and Zahid Mahmood (one) at the crease -- still trailing England's mammoth 657 first innings total by 158 runs, with three wickets in hand, according to the PCB match report.

On an interesting day, Pakistan were lifted by centuries from skipper Babar Azam (136) and openers Imam-ul-Haq (121) and Abdullah Shafique (114). But England took three wickets in the first session, none in the second and four before the close to put themselves in a better position.

Spinners Will Jacks (three for 132) and Jack Leach (two for 160) shared the early spoils, while the pace duo of James Anderson and Ollie Robinson took a wicket each.

Saturday's final session belonged to home skipper Babar Azam, who hit 19 boundaries and a six for his first Test century against England.

Debutant Saud Shakeel, who added 123 for the fourth wicket with Babar, was caught behind off Robinson soon after the tea interval.

The centuries by Shafique and Haq meant for the first time in 146 years of Test cricket, the openers of both teams reached three figures in the first innings. Their 225-run opening stand – a Pakistan record against England – is also the first time in Test history that two 200-plus opening partnerships were made in the same match, following Zak Crawley and Ben Duckett's 233-run partnership for the visitors.

Pakistan started the day on 181 without loss and Abdullah Shafique, 89 overnight, was the first to three figures with a sharp single off Joe Root. Imam-ul-Haq, who started the session on 90, followed with a boundary off the same bowler to complete his century.

PAKvENG, 1st Test: Pakistan off to strong start in reply to England’s 657 on Day 2

England is touring the cricket-loving nation for a Test series for the first time in 17 years. They earlier stunned Pakistan in recently concluded the T20 World Cup finals and will be eyeing to dominate in the long format too.