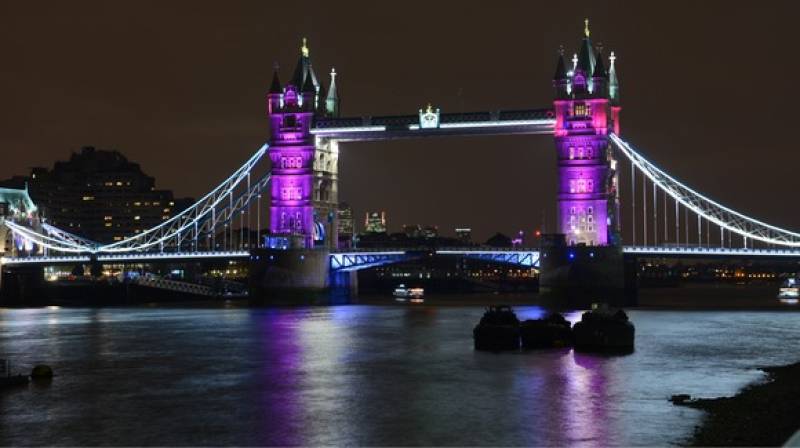 LONDON (Web Desk) – Landmarks across Britain are set to turn pink this evening to mark the birth of a new princess to the Duke and Duchess of Cambridge.

Tower Bridge announced it would be part of the celebrations by reposting a picture taken during the 2012 Olympics of the landmark bathed in pink light.

The London Eye and the foundains in Trafalgar Square are also expected to be specially lit to celebrate the Royal birth.

The BT Tower was the first of the London landmarks to celebrate the baby with the words “It’s a girl” written at the top.

Tower Bridge then declared its intentions, tweeting: “Congratulations to the Duke & Duchess of Cambridge on the birth of a baby girl! Tonight we’ll turn pink to celebrate.” It then added: “We’re delighted at the news and having gone blue for George, it’s only fair!”

Other landmarks in the Capital, such as the fountains at Trafalgar Square, the Golden Jubilee Bridge and the London Eye, went pink for the night, much to the delight of tourists and Londoners.

The celebrations extended to Northern Ireland where the Belfast City Hall changed colour.

Well-wishers and the media got their first glimpse of the newborn as she was brought out of the hospital just after 6pm yesterday.

However, not everyone was happy about the decision, with some calling it “sexist”. Many also pointed out that previously blue was the colour associated with girls, not pink.

There were cheers from the crowd gathered outside the hospital when the announcement was made. Some had been camping for almost two weeks in anticipation of the birth.

The baby is the first to use the title princess since Princess Eugenie, 25, younger daughter of Prince Andrew. The last Princess of Cambridge was Princess Mary Adelaide, George III’s granddaughter, born 182 years ago in Hanover, Germany, and known affectionately as “Fat Mary” because of her large girth.