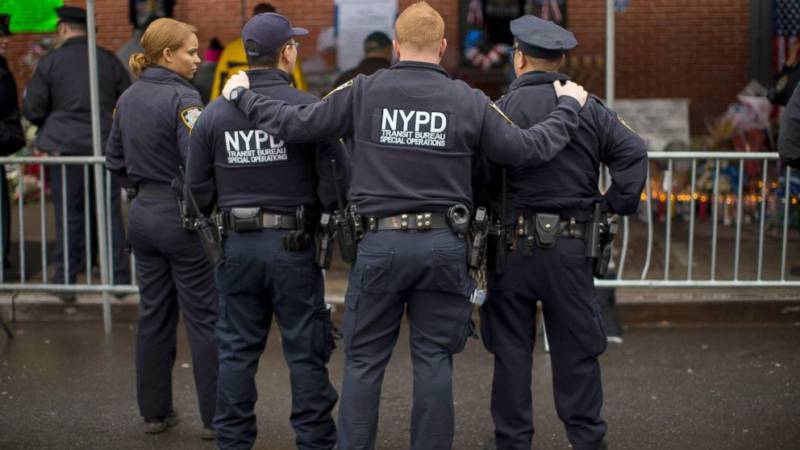 NEW YORK (Web Desk) - A plainclothes policeman is in a critical condition after being shot in the head in New York.

Brian Moore, 25, was shot while attempting to question a suspect from his police car in the borough of Queens.

New York's Jamaica Hospital said the officer underwent surgery there about four hours after the shooting.

Police said the suspect, named as Demitrius Blackwell, was arrested about an hour after the incident.

Bill Bratton, New York's police commissioner, said Mr Moore and his partner Erik Janssen were in an unmarked car when they saw a man adjust something on his belt.

Suspecting he was carrying a gun, the officers approached him.

"The man immediately removed the firearm from his waistband and turned in the direction of the officers and deliberately fired several times at the vehicle, striking Officer Moore in the head," Mr Bratton said.

New York Mayor Bill de Blasio told reporters: "It's a reminder of the dangers all of our officers face every single day."

Mr Moore came from a police family and had served with distinction, the mayor said.

Saturday's incident is the fifth shooting of a police officer in New York in five months.

In December, two officers were shot dead in their car in New York by a man who then committed suicide. The gunman in that case had posted anti-police messages on social media but there is no indication of a similar motive in the latest shooting.

The shooting comes amid heightened tensions in the US over the police's use of force.

On Friday, a prosecutor in Baltimore announced charges against six officers over the death of a man in custody.