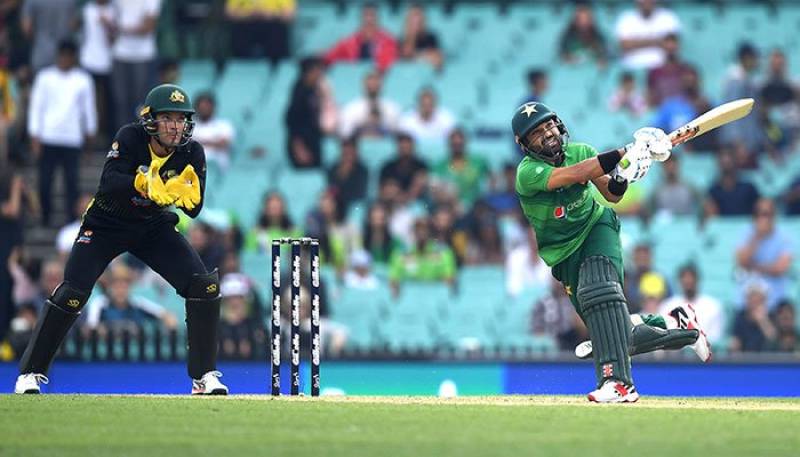 SYDNEY - Australia were 41-0 after 3.1 overs in pursuit of their revised 119-run target against Pakistan on Sunday when rain interrupted play for the second time, eventually forcing the first T20I in Sydney — already reduced to 15 overs — to be abandoned.

The opening up of the heavens saved Pakistan from a certain defeat, as in the prior over the Aussies had bled Mohammad Irfan for 26 runs and taken control of the match.

Thus, new captain, Babar Azam escaped the ignominy of starting his era with a defeat as Pakistan did not go 1-0 down in the three-match series.

After being sent in to bat first, the tourists were 107-5 in 15 overs when play was halted for over an hour due to showers, meaning Australia were set a revised target of 119.

Australia struck early to send Fakhar Zaman (0) and Haris Sohail (4) back to the pavilion, with Pakistan reeling at 10-2.

New T20I captain Babar Azam and Mohammad Rizwan, however, stabilized the ship and formed a valuable 60-run partnership for the third wicket.

Shortly after Rizwan (31) was dismissed by Ashton Agar in the 11th over, dark clouds hovered above the Sydney Cricket Ground.

The rain eventually interrupted play with the tourists 3-88 in the 13th over when Babar Azam was on 43* and Asif Ali on an unbeaten 10.

When play resumed at 88 for three in the 13th over after the rain break, Asif fell to Richardson for 11 and Imad Wasim to Starc for a duck. But Azam carried on, bringing up his 11th T20I half-century and making sure that Pakistan finished at 107-5.

However, the target was revised to 119 as the match had affected the Pakistan innings.

Australia are in supreme form and fresh from a 3-0 series sweep against Sri Lanka, in contrast to Pakistan who were embarrassed by a second-string Sri Lanka at home across three matches last month.

That debacle cost Sarfaraz Ahmed his job as captain and a place in the squad, while experienced campaigners Shoaib Malik and Mohammad Hafeez were also axed in the shorter format.

The world's number one ranked T20 batsman Azam is captaining the team as he tries to re-build for the World Cup next year.

Of note, 37-year-old seamer Mohammad Irfan features for the first time in more than three years.

Australia kept the same side that beat Sri Lanka by seven wickets on Friday.

"With a little bit of weather around we want to hopefully get some early wickets," said skipper Aaron Finch, as the first raindrops of the day, started to fall.

"They've got a really well-rounded side," he added of Pakistan.

After Sydney, the series moves to Canberra on Tuesday before a final game in Perth before the sides face each other in two Tests.